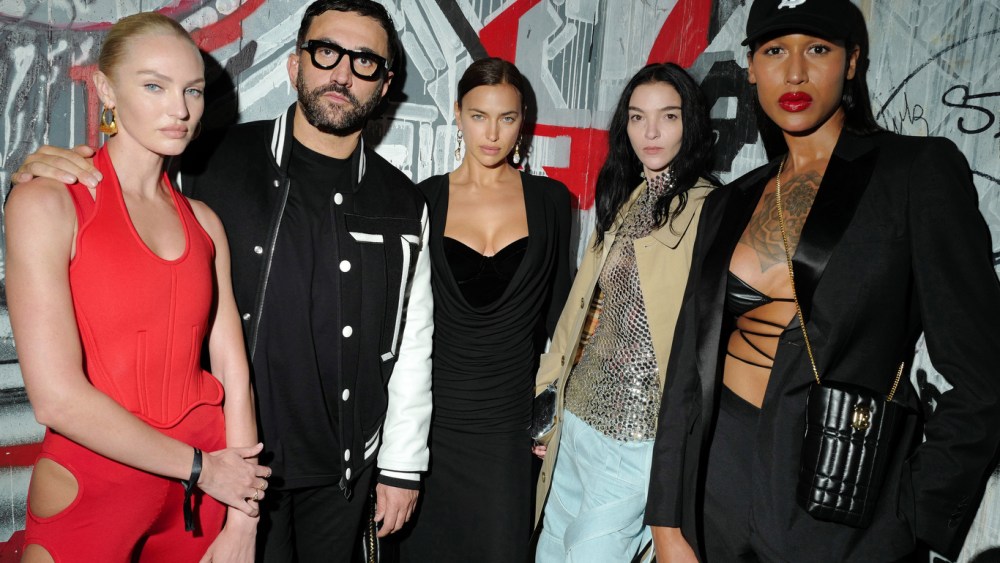 Riccardo Tisci arrived at Burberry’s mega-dance party Monday night on an artistic high: He had just witnessed Anne Imhof’s sprawling performance piece that capped off her solo show at the Palais de Tokyo and incorporated a motorcycle brigade, mosh pits and dancers emerging from fountain pools or pouring water on each other.

“It was very strong, so beautiful. You know I’m a very big fan of hers,” Tisci enthused about the German artist, whose imposing and thought-provoking works on display at the Paris museum include gilded diving platforms, loudspeakers mounted on ceiling conveyors, and videos of her artist girlfriend Eliza Douglas engaged in various conniptions. “This one, I think, is the best performance she’s done ever, because you can see her knowledge of culture and of a young generation. It had nature, sex, music, art — everything the young generation experiences, but not in the classic, cliche way.”

The designer apologized for his late arrival but explained he had accompanied Imhof as she toured the exhibition and gave instructions to each performer, many of them clad in Burberry. Dubbed “Natures Mortes” (“Still Lives,” in English), the solo show wraps its five-month run on Oct. 24.

“I love this kind of performance art, and I love strong women,” Tisci said as models, musicians and some of the coolest kids in Paris piled into the busy party.

British musician Blane Muise, known as Shygirl, plucked a tiny cheese canape from a silver tray with her long blue nails and talked about how fashion nourishes her performances.

“Before I was making music, I used to work at a model agency as a booker,” she said. “I’m just drawn to the atmosphere. You can do anything in fashion, you can think bigger than reality, and I love that vibe where everyone is up for anything and pushing the boundaries.

“I feel like it really helps me bring my music to life, so when I can get into the character that I want to be, it’s the right outfit, the right boots, then I can feel it and I can actually give the performance I need,” she added, kicking up one leg to show off her thigh-high heels with an open toe. “My foot has never looked sexier,” she purred.

Muise said she’s working on a new album, having so far released only EPs, and gearing up for a tour that was scuttled by the pandemic and rescheduled for March 2022.

Decked out in Burberry checks from head to toe, Belgian rapper Shay said she’s also embarked on a new album, while juggling her role as a judge on the French version of Netflix series “Rhythm + Flow.”

Ezra Miller and Isabelle Huppert were among the bold-faced names pummelled with beats and laser flashes as the likes of Slim Soledad, Hank Korsan, Joie Iacono and Lsdxoxo took turns on the decks.