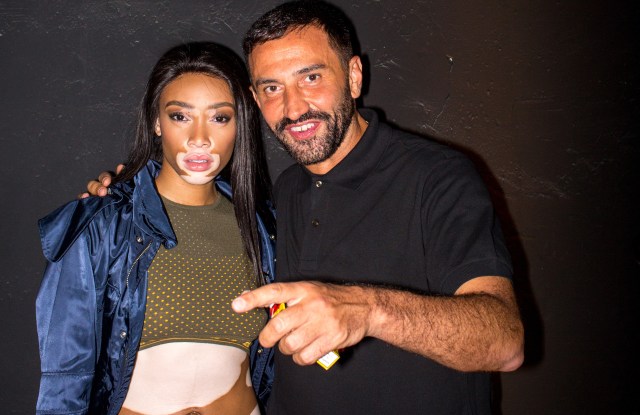 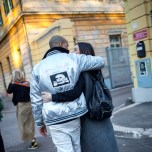 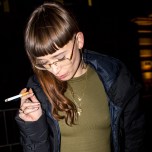 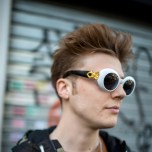 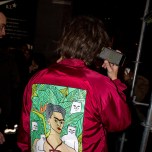 “Those who love me can wait for me.”

That wasn’t arrogance, but just honest self-awareness in the words of Riccardo Tisci, who was in Rome on Friday for the celebration of his latest footwear collaboration with Nike, the NikeLab Air Max 97 Mid x RT. Back from a trip to Brazil, Tisci, who left his role as artistic director at Givenchy in February, looked tan, rested and relaxed while enjoying a coffee in the lush garden of the Hotel de Russie in the heart of the Italian capital. While aware of the buzz generated by his departure from the French house, where he will be succeeded by Clare Waight Keller, and of the rumors on his appointment at Versace, Tisci said he is enjoying a break, after 12 years of hyperintense work at Givenchy.

“There are very interesting things on the table now and I’ll take a decision before summer. But now, after having been to Morocco and Brazil, I still have to do a couple of spiritual things before the summer,” he said. “I really wanted to take a break because I needed to go back to reality….I needed to have the time to do things, which were impossible for me to do while working….I wanted to spend more time with my mum, who is 88, to spend time with my nephews….I need to go back to real life.”

A real life — with no drivers waiting for him outside of his home, a tight schedule of appointments and no time off — is actually what he is enjoying.

“When I left Givenchy I was honestly wondering if I would have missed certain things, but I actually realized in the last period, also traveling in a very simple way, that I really enjoy the real world and I still love the simple things. And this probably demonstrates what my mother always says — ‘Riccardo, you might become someone, but the kid inside you never grew up,'” he confessed. “I’m not worried about the future. After the closing of the relationship with Givenchy, which actually happened peacefully, I was really moved by two things — the incredible demonstration of love I got from the fashion industry and the tribute the Givenchy team made to my career. These two things are extremely important for me.”

While enthusiastically explaining his “reverential and almost classic” approach to the design of the NikeLab Air Max 97 Mid x RT, which he made higher than in its original version, embellished with high-end white stitching on black leather and enriched with a zippered pocket for money on the shoe tongue, Tisci elaborated on his personal vision of the fashion industry today.

“I have my idea of what is happening in fashion now. I wanted to take a break also because it’s a confusing moment in the industry. In the last 10 years so many things happened…so many designers have left their fashion houses, such as Margiela [Martin Margiela left the company he founded in 2009;] we assisted to this phenomenon of the high-street retailers delivering collections before designers….I’m getting confirmations from the industry of what I think — a ‘clean up’  moment is fast approaching. I feel a growing desire for classicism….I think we are going to see a rebirth in fashion,” he said. “I think that what fashion needs now is identity and honesty, which I think got lost in the last years. I think there will be a return to that honest fashion of the Nineties.”

See Also: Overheated! Is Fashion Heading for a Burnout? >>

Tisci highlighted that a sense of neo-classicism infuses the images which Paolo Roversi shot to present the NikeLab Air Max 97 Mid x RT, where a mysterious woman stands out as a classic sculpture on white and black backgrounds. The neo-classic inspiration was also a driver for the selection of the location to launch the new shoe style.

“The first reason why we decided to celebrate the launch of the shoe in Italy is because Italy is permeated by this neo-classicism, which translates in the beauty, allure, elegance you can find in each Italian city,” Tisci explained. “Second thing, I think Italy is returning to being huge, despite all its problems, and Rome, its capital, is the most beautiful and decadent city. I came back from Brazil a day earlier, and last night [Thursday], I managed to do a solitary stroll across the streets of Rome — every second you find a spectacular corner, a special view. It’s incredible.”

Describing the latest collaboration with Nike as “a very personal project,” Tisci, who began his partnership with the American company in 2014, reminisced about 1997, when the first Air Max was launched, with incredible success especially in Italy where it was called “The Silver.”

“When in that period I was going to Riccione to the Cocoricò [one of Europe’s most influential clubs] and to Ibiza, everybody was wearing those shoes….If you didn’t have them, you were considered a loser,” he said. “In 1997, I was 23, I was already in London. It was my last year at  Central Saint Martins. Those days that year, I was writing my final thesis and I was starting to prepare my graduation collection. It was a moment of mixed feelings. I was worried of not being able to make it, to fail in my career — I honestly never imagined I would have arrived at this point. Design actually was instrumental to transform my shyness. Before moving to London, in Italy, I felt trapped in a sealed box, then at Central Saint Martins I unconsciously found the language to express myself. At that time, I used to wear nylon tracksuits with an oversize sweater wrapped around the hips. It was a moment in London where people were interested in esotericism, the transition between rock ‘n’ roll and hip-hop was happening and we had this strong, crazy pop moment — Alexander McQueen was coming out, John Galliano was booming. I was wearing the Silver with big mohair sweaters. It was a weird moment for me…things were changing for me…I was free and worried.”

In 1997, Tisci was already close to his friend and muse, model Mariacarla Boscono, who arrived to the party Friday night, held at the former Dogana venue in Rome, sporting an evening version of the gym look with a pair of leggings worn with a lace bodysuit and a Nike sport bra, as well as laced-up boots and a lightweight pin-striped trenchcoat.

“Riccardo and I used to have the Silver. We were both in London when they came out, he was at Central Saint Martins. We were very into clubbing and raving at that time and we really needed to stay comfortable,” said Boscono, who was just back in Rome after a work trip to New York. “I’ll really try to be home for a while now, I need to stay with my daughter.”

“I was already in Milan in 1997. I was working at Bottega Veneta, and I do remember that it was about wearing a suit with a sneaker, which was actually what I’m doing today. Before that, no one was wearing sneakers as an element to dress up a look,” said Sansovino 6 creative director Edward Buchanan.

While Marvin & Guy, Claudio Coccoluto and Breakage entertained guests with DJ sets in the industrial space with concrete black walls, a range of entertainment and sport personalities joined Tisci and his big family in the celebration.

“I literally came to Rome just for this event. I should go back tomorrow, but hopefully, I’ll stay a little bit longer,” said model Winnie Harlow, who revealed she will start working on an undisclosed project with Nike very soon. “I was actually introduced to Air Max four years ago and since then I have always had one clean white pair.”

“I never liked the Silver and I never wore high-top shoes, but these sneakers are the most comfortable I have ever worn in my life,” Italian boxer Clemente Russo said candidly.

Riccardo Tisci Just Does It >>