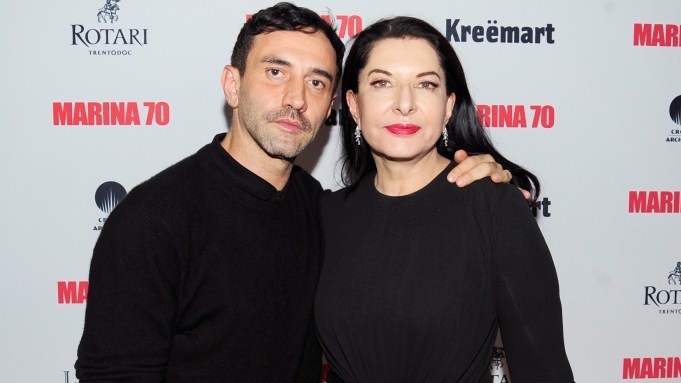 Riccardo Tisci has entered Trump’s America. The Givenchy creative director touched down in New York Thursday afternoon for the first time since the presidential election.

“I don’t agree with most of what he says, because I’m not racist. I’m actually trying to bring people that are forgotten from society and bring them into society and his ideology is [all] about taking people out,” Tisci said of the president-elect at the Guggenheim Museum, where close friend Marina Abramović was hosting her 70th birthday party.

The logistics of Trump’s forthcoming appointment further hampered Tisci’s stateside homecoming. Expected to arrive at the event at 7:30 p.m. for Abramović’s performance, Tisci rolled in — flanked by Bella Hadid and Naomi Campbell on each arm — nearly a half-hour late, missing the show as a result.

“I missed half the speech. One opinion is that for sure, since Trump [was elected] president, there is much more traffic,” Tisci declared.

He had flown to New York especially for the party — joining Monica Lewinsky, Jean Pigozzi, and Dustin Yellin in the reverie of Abramović’s life.

The artist — known for her flamboyant, often-misconstrued performance acts — took her birthday as another opportunity to unleash a confounding display of oddities.

Guests arrived inside the Guggenheim’s rotunda, largely expecting a raucous scene. But instead, they were given the silent treatment.

Partygoers were instructed to spend 70 minutes in silence, covering their mouths with gold foil, and wearing noise-canceling headphones to meander among the museum’s current Agnes Martin retrospective.

Just past 7:30 p.m., Abramović emerged in a black gown, and sounded a gong — signaling her guests to remove their headsets, and listen to an address in which the artist heralded the last chapter of her life.

A performer, grimly dressed in an executioner’s costume, began to sing. “And now, the end is near, and so I face the final curtain,” aptly began a jazzy rendition of Frank Sinatra’s “My Way.” Smirks ensued.

Waiters passing trays of sourdough bread morsels began canvasing the room. Little boxes of specially made Ladurée mouth-shaped chocolates were handed to ravenous partygoers on their way out the door.

But Lewinsky was electrified. “I am a fan and a friend,” she said of Abramović. “We met last year when we both gave TED Talks and just connected and bonded.

“Hearing about [her 1974 performance] ‘Rhythm 0’ really resonated with me. Her performance when she stood at the table with all the items displayed, and the idea of [it talking about] what society can do to you had a big impact on me.”