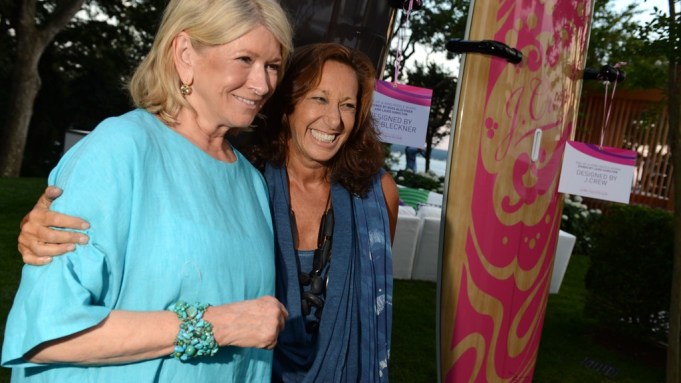 “I can’t image a chicer location for our second annual Paddle and Party for Pink,” said Myra Biblowit, president of the Breast Cancer Research Foundation, as she took in Lisa and Richard Perry’s Italianate-style North Haven, N.Y., estate on Saturday night. On the lawn, more than 650 revelers clotted around Saint-Tropez-inspired arrangements of stark white lounge furniture under the looming presence of a large, fertile-looking female sculpture by Niki de Saint Phalle. A pair of models circulated in black and white Lisa Perry ensembles, Leviev diamonds woven into their hair and wrapped around their necks. The hostess herself wore a Grecian-inspired flowing red and pink dress that she had designed especially for the event as she guided guests such as Matt Lauer, Aerin Lauder, Mark Teixeira and Hilary Rhoda towards the unobstructed panoramic views of Noyack Bay and the Shelter Island Sound.

Guests wandered the grass between the yellow loops of Zhu Jinshi’s “Rings” sculpture and the Perrys’ house, where a covered terrace provided shelter and palm-sized plates bore bites from local restaurants. The collective appetite had been well-earned. The party was preceded by an 8 a.m. paddleboard race at Havens Beach in Sag Harbor, attended by Carolyn Murphy and Edie Falco.

“I was actually not at the event this morning,” Thom Filicia revealed, “and one reason for that is because I was hung over. The other reason is that Laird is here…and I wasn’t about to compete with that.”

Surf superstar Laird Hamilton is credited with both the record for surfing the world’s “heaviest wave” 13 years ago in Teahupo’o, Tahiti and the current vogue of paddleboarding as both a core-slimming and meditative exercise.

“It’s like walking on water,” he said, citing the explorative possibilities. “You see everything from the sea life under you to the coastline in front of you. It’s a different type of freedom.” It is also worth noting, he added, that paddleboarding is a spectacular workout.

Maria Baum, co-owner of popular Sag Harbor eatery Tutto il Giorno, founded the event during her own fight with breast cancer, inspired by a conversation with the Perrys over dinner. The couple came on board almost immediately, helping to raise $615,000 last year and more than $1.2 million on Saturday.

“Richard [Perry] taught me how to paddleboard — it played a huge part in my recovery — and soon I was going out and having these long, extremely emotional rants at ‘Laird,’ this guy whose name was the label on my board, and I’d come back so much more relaxed and energized by the beauty of the bay,” Baum said.

As for the actual, living Hamilton’s presence at the party, it was a fortuitous act of branding: “A mutual friend told Gabrielle [Reece] about these purging, calming, therapeutic conversations I would have with an imaginary Laird, and now they’re our new friends, they came to stay with us, it’s been amazing.”