Richard Chai and Joe Jonas talk about being BFFs. 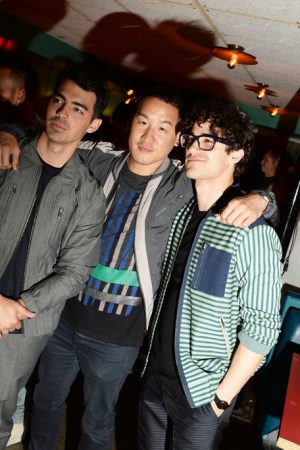 Few things in life are certain, that much is clear. But if Richard Chai turns up anywhere, Joe Jonas is surely trailing right behind. So when Chai organized a dinner in anticipation of his first full-fledged men’s show in years, Jonas was naturally in the house. Not only that, he cohosted (Jonas is also one of the eight ambassadors for NYFW: Men’s).
The two of them were hanging out on Monday night by the back of Tijuana Picnic in the Lower East Side, designer and pop star — Chai the Donna Karan to Jonas’ Barbra Streisand.

“Joe is now one of my closest friends now,” Chai said.

Jonas: “We’re genuine friends, not just red-carpet friends.” Huddling together in their wolf pack was “Glee” actor Darren Criss and Gigi Hadid, the young model lately linked to Jonas in the tabloids.

The designer first met the singer through his younger brother Nick, when Chai dressed him for a Costume Institute gala. Later, he styled a Jonas Brothers music video. “I did the entire thing for it,” Chai said.

It was inevitable then that they’d eventually become best buddies.

“He was one of the first fashion shows we ever went to. He took us in and it was really cool,” Jonas recalled. “He was always really good to us and then years later becoming friends, it was a whole different experience.”

That was three or four years ago. The two share an interest in fashion, but it’s not just about the clothes, Chai says.

“Joe and I are genuinely friends,” the designer said, suddenly growing reflective. “Here’s what people don’t realize about Joe, and maybe me as well: He’s a huge celebrity but he’s the most normal person. For me as well, when I’m in fashion, I’m in this world, but what I do outside of my job is just like really normal stuff.”

Like good friends, they support each others’ creative endeavors.

“I brought him to a show I did with Demi Lovato in Brooklyn. It was a good time,” Jonas said, while returning the compliment about Chai’s design skills: “I can genuinely say I’m a fan.”

And though it may not look like it at first, they do have other passions outside of this topsy-turvy world of fashion and entertainment they inhabit.

“We both love food,” Jonas said. “Now we’re trying to exercise because of how much we eat together.”

But even this bromance has its limits.

“He’s been trying to get me to join SoulCycle,” Jonas said. “But I don’t know. I haven’t joined the cult.”