The spiritual set turned out to New York’s Pierre Hotel on Thursday night for a gala to benefit the Tibet Fund. 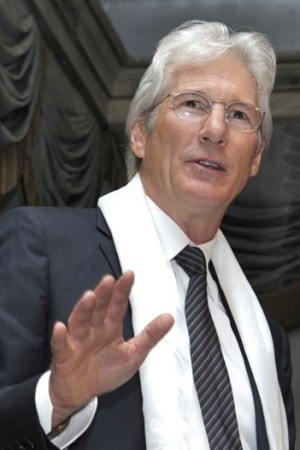 According to Buddhist axiom, “life is suffering.” But had the enlightened one attended the Tibet Fund Gala at Thursday night, he might have thought otherwise, at least on the culinary front.

Socialites, artists and philanthropists flocked to New York’s Pierre Hotel for the fund-raiser where they dined from a multicourse tasting menu prepared by some of the city’s most notable chefs. Organizers of the Tibet Fund honored actor Richard Gere and founders of the Rubin Museum, Shelley and Donald Rubin for their charitable work to preserve the culture and tradition of the Tibetan people.

“Maybe it’s because I’m tired, but I’m really emotional about this,” said a tan, soft-spoken Gere, who had just come from filming. “There’s such a compassionate, true, authentic feeling here.”

Gere, a Buddhist, who has supported the Tibetan cause for more than 30 years, choked up momentarily after the organization’s president Rinchen Dharlo listed a litany of pro-Tibet initiatives the actor has spearheaded.

“I feel very old,” Gere said with a smirk.

Fellow actor and Buddhist Michael Imperioli professed his passion for the philosophy, but balked at the suggestion that the event’s opulence may stand in contrast to Buddha’s teachings about material wealth.

“If they held this event at a little dump somewhere, not as many people would show,” he said.

Chef and co-owner of Le Bernadin Eric Ripert enlisted his A-list friends to cater the event.

“A lot of people coming tonight are not Buddhist, but they want to help the Tibetan community in exile,” he said.

“Unlike me, Tom is not Buddhist,” Ripert said citing one example, “Top Chef “ judge Tom Colicchio.

“But I named my son Bodhi,” quipped Colicchio.