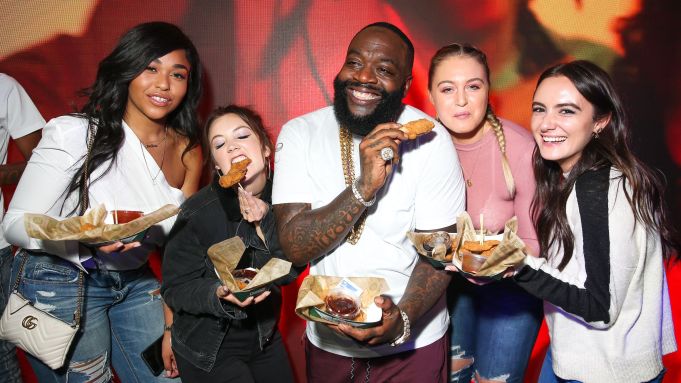 “My life’s kind of everywhere,” said Jordyn Woods. The 20-year-old model and Kylie Jenner bestie has been relaxing post-fashion month, but her monthlong hiatus will soon be over. While at American Eagle’s 40th anniversary celebration and opening of AE Studio in Union Square, Woods opened up about her upcoming projects: a clothing line, a potential skincare line and — surprise, surprise — a children’s book.

“I want to make a children’s book,” Woods shared. “There’s a lot going on.” Does the aspiring author have a storyline in mind already? “I have it all figured out in my head,” she said, not offering further details. It seems the rest of us will have to wait for her to put pen to paper.

Rick Ross, the night’s big draw, rolled up to the venue in a maroon sweatsuit and sunglasses with lenses that appeared to be joined together by a golden bee. “This is the culture,” he said. “This AE Studio speaks for itself. It’s all about artists coming together and collaborating and seeing what comes up. I think that’s what’s always been dope. Me coming in the game, coming in for my 10th album, I’ve collaborated with so many different artists before and after me, it’s just all about being versatile and just keeping the door open to the culture, to the youth and what’s going on.” He later performed inside as the young crowd mingled and danced in the new concept store, which features a wall of washers and dryers that college students can use to do laundry.

Billie Lourd shared that she’s been a fan of American Eagle undergarments for years: “I’ve low-key been wearing their underwear since I was a child. Is that weird?” The actress added that she’s “working on my life,” having just wrapped filming for “American Horror Story” about a month ago. She recently bought an RV, which she plans to take camping on the weekends.

“You heard it here first: I bought an RV,” she said. “This is true. I bought an RV and I’m gonna go and do some camping on weekends, obviously auditioning and still trying to get jobs and stuff, but just enjoying my life, hanging out with my friends and going on RV trips. But also auditioning.”