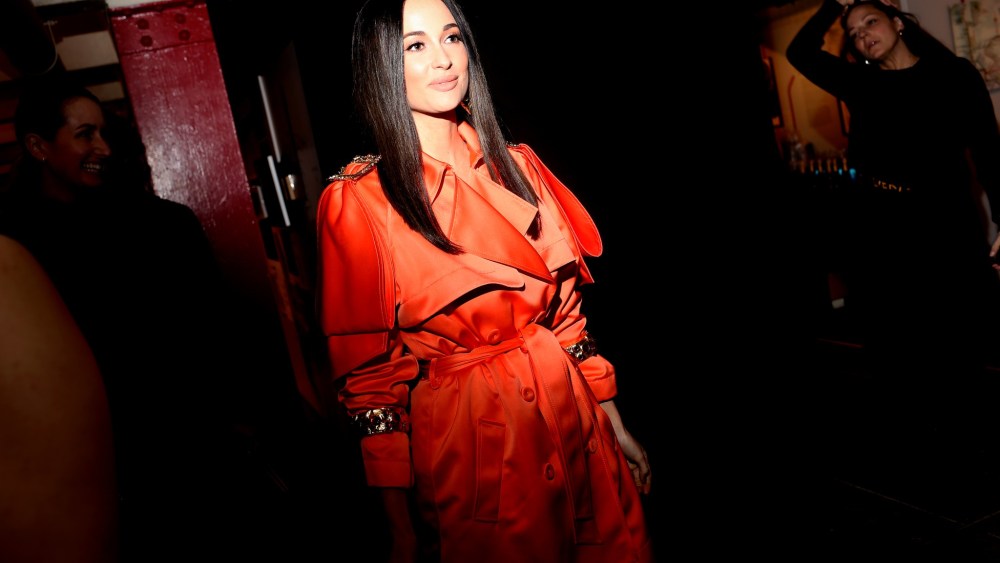 The subway in Brooklyn isn’t usually where you might find a pack of celebrities, in full glam and Moschino head to toe, but on Monday that’s where Kacey Musgraves, Kim Petras, Madelaine Petsch, Julia Fox and more gathered for Moschino’s pre-fall 2020 show at the New York Transit Museum.

“Kim! Hi!,” Char Defrancesco shouted to Petras, as she sauntered onto subway car 4573.

Aquaria is also a Petras fan.

“Congrats on your tour,” she told the pop singer.

“Thanks, it wrapped,” Petras replied, adding that she was only in New York through the show, heading out the next day.

Ahead of showtime, Petsch took advantage of the photo-opp-friendly show venue, perching on a bench beneath a Court Street station sign to have her picture taken.

“Is that Nina Garcia? I know her,” she asked a handler, motioning toward the Elle editor in chief.

It was the first Moschino show for Musgraves, who worked with Jeremy Scott on her 2019 Met Gala look.

“It was really fun — I loved the theme last year. I mean, first of all, I’m from Texas, so obviously I love camp. And he’s the king of it,” Musgraves said of the Met process. “We had a blast, curating this life-size Barbie look. I got to go blonde, see what that was like for a night.”

As to her own approach to fashion, she says she likes to change it up, as evidenced by the many designer looks she’s debuted this past breakout year. For the Moschino show, she wore a sherbert-orange satin jacket dress; “you look like a Starburst,” Aaron Philip told her as she passed by en route to her seat.

“I love putting a foot in the past, but it can’t be both feet in the past — it has to have a foot in the future, in present day,” Musgraves said of her approach to style. “Otherwise it’s just a costume. I like to mix it up and have fun; I love monochromatic color palettes. We love a sunset color story — that’s our favorite,” she added, motioning toward her stylist, Erica Cloud. “Mostly, I have to feel comfortable and feel like me, because if it doesn’t feel right you can read it all over my face. I don’t sell the look very well.”

As for the subway? Musgraves said when in New York, “if I have the energy I will — but I’m usually just laying in my hotel room.” Her rule of thumb for subway etiquette?