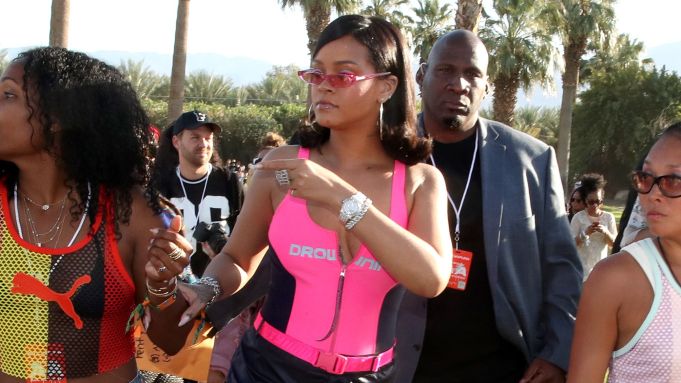 How does one throw a successful pool party at Coachella? Take a page from the book of Rihanna, who pulled one off without a hitch on Saturday — and without ever formally giving out the address.

Held at a house not far from the festival, the party lived up to what one might hope it would. There was a DJ playing Rihanna, a mini-store selling Rihanna’s latest line, a small arena for ATV racing, a slide and, naturally, a pool around which Rihanna and her friends — Leonardo DiCaprio, The Weeknd, A$AP Rocky and French Montana, to name a few — sipped drinks in white tents.

Upon arrival, Rihanna and her crew turned the driveway into a catwalk, parting the crowd for her to strut her way straight to the DJ booth. There, she danced, posed and held court at the late afternoon fete.

“We’re feeling this retro vibe, we want to teleport somewhere else with modern looks,” said Yusef Williams, Rihanna’s longtime hair stylist and consequent key player in her continuous reinvention. “My inspiration board is endless. Between me and her, we’re crazy. All we do is look at pictures and art. That’s what we do.”

“Rihanna has a sense of diversity,” said Normani Kordei of Fifth Harmony. “[There’s] something for every woman out there. She continuously reinvents herself.”

Maxwell Osborne, Jordyn Woods, Daniel Caesar, Jessie Williams, Kris Humphries, G-Eazy, Grace Mahary and H.E.R. mingled in the tents adjacent to the pool. DiCaprio, garbed in his typical hoodie and sunglasses attire, posted up in a tent with models, as Timothée Chalamet soaked in the scene. In a full embrace of the party’s offerings, Jasmine Sanders hopped in line for the slide.

“What haven’t I done?” she said, referring to her weekend thus far. “I’m going to see Beyoncé tonight, I’m the biggest Beyoncé fan ever. I’m also going to Neon Carnival. Last year, I was the crazy person that didn’t go and pick up her wristbands in time.”

Of what she likes about the Fenty Puma looks, Sanders joked, “Number one, two and three on the list is Rihanna. And then her clothes kind of fit in there. But then there’s the makeup, too. It’s all her.”

Shortly after, the party’s reason for celebration walked into the house for some privacy, relief from the heat and, perhaps, an outfit change. Such is life when you’re the queen of reinvention.