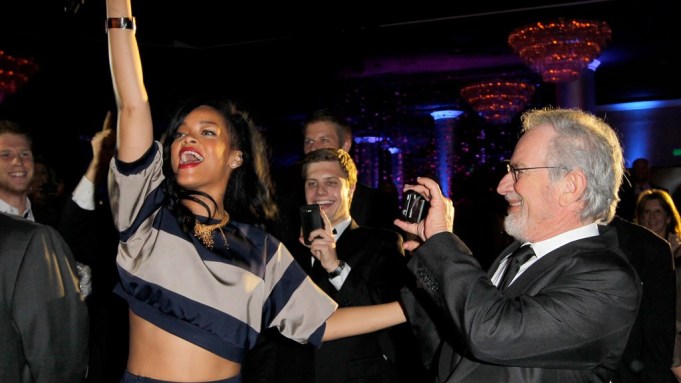 Talk about payback. At Wednesday night’s 15th annual Unforgettable Evening, the yearly Entertainment Industry Foundation Women’s Cancer Research Fund benefit in Los Angeles, Rihanna made good on a promise from last year when a sore throat kept her from performing at the Saks Fifth Avenue-sponsored event.

“I said I would make it up to you all, so I hope you sing along if you know the words,” she said before starting a rendition of Bob Marley’s “Redemption Song.”

It was the only cover in her set, which relied otherwise on her own deep catalogue of hits including “Only Girl in the World,” “Umbrella,” “What’s My Name?” and “We Found Love,” the last of which she performed amidst the dinner tables, giving hugs to Entertainment Industry Foundation Women’s Cancer Research Fund co-founder Kelly Chapman Meyer and honorary chair Steven Spielberg as she spun by. The director, like seemingly everyone else in the crowd, recorded the spectacle on his iPhone.

The intimate yet raucous set (Amber Valletta and several others danced on tabletops) capped off an evening honoring Glamour’s Cindi Leive and Sheryl Crow with the Nat King Cole and Courage awards, respectively.

“I bow down to you women,” said Leive of fund co-founders Jamie Tisch, Quinn Ezralow, Marion Lurie, Anne Douglas and Meyer. “Well, I literally would if I weren’t wearing a tight skirt.” The editor accepted her award on behalf of her mother, whom she lost to cancer.

Crow, whom Rita Wilson called “a rock goddess,” battled breast cancer in 2004 and has since endowed an imaging center for early detection of the disease. She said, “I’m now a member of the MSH Club, which stands for ‘Make S–t Happen.’”