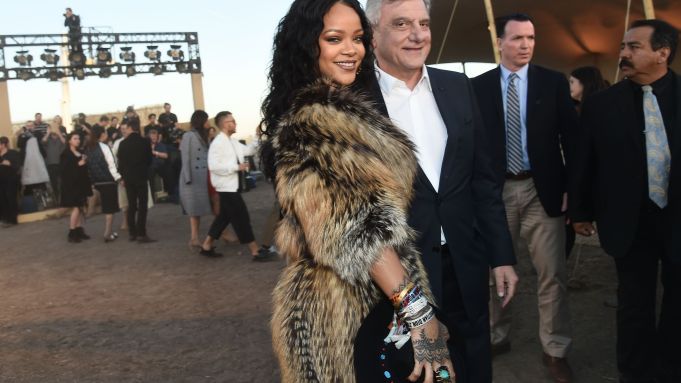 It takes a certain type of magic to coax the most jaded Angelenos and movie stars out of complacency and into surprise and delight. But Dior and Maria Grazia Chiuri took the 800 guests at the brand’s cruise 2018 show on a stylish safari, California style, that did just that.

“This is quite breathtaking. It’s incredibly special,” said longtime Dior ambassador and Hollywood golden girl Charlize Theron, who’s attended her fair share of runway shows as the face for J’Adore since 2004. “You can see the time and energy that went into it. It’s breathtaking making the drive up here and seeing the sun and all the raw elements. I’ve never been up here and I’ve lived in L.A. for 20 years, so this is pretty special that they found this.”

And what did it remind her of? “I’m from South Africa so my instant [reaction] was, ‘Oh, this is like safari.’ It’s really great.”

Indeed, Dior and Bureau Betak spared no expense in transforming a swath of the Upper Las Virgenes Canyon Open Space Preserve in Calabasas into a luxury camp that looked straight out of the “Out of Africa” movie set.

As cars approached a single, winding road uphill into the dry brush of the park, they were met with sweeping vistas of mountains and canyons with nary a person or structure in sight. That is, until they reached a makeshift valet, where they were transferred into pimped-out golf carts designed to look like ATVs for a bumpy yet scenic drive up to “base camp.” There, a series of khaki tents and temporary adobe structures formed a small city, in which lay a concert stage, several Airstream trailers, and bi-level show seating with rugs and pillows.

No surface was left unbranded, from the folded “Dior Sauvage” blankets on each seat to the valet claim tickets, printed with renderings from the Lascaux cave paintings that inspired Chiuri’s collection. The most impressive signage wasn’t the gold step-and-repeat, but the two hot-air balloons and light-up “Dior Sauvage” lettering seen on a hill from a distance.

“This is unbelievable,” said Camilla Belle. “Being born and raised in L.A., I’ve driven through these areas before but it all of a sudden becomes magical desert safari land. With the tents and the sand, and then looking outside with the balloons and the sunset, it’s absolutely beautiful. This is stepping it up to a very beautiful level.” (Dior extended the experience the next day with a brunch at One Gun Ranch in Malibu.)

Nick Jonas, although he politely declined interviews, had to admit, “It is pretty beautiful.” He then asked a French Dior staffer to take an iPhone video of him with the balloons in the backdrop.

For Dior chief executive officer Sidney Toledano, it evoked another place. “I know why they call it California. It’s the Spanish side of being in California,” he said of the state’s naming by Spanish conquistadors after Califia, a mythical island paradise. “I’m from Spain, and it looks like Spain.”

“We found the solution between Maria Grazia’s Sauvage concept and the unexpected. People will come here and go, ‘Oh, wow.’”

He was right — everyone from Miranda Kerr to Brie Larson to Kate Bosworth had similar expressions upon arrival. It was hard to make out what Rihanna thought, as she was one of the last to arrive, ushered to her seat next to Toledano by an entourage of handlers and trailed by a pack of photographers. She was dressed in a striped fur clearly made for her and inspired by the wild collection.

The outerwear was apropos, as it grew chilly after the sunset show and people wrapped themselves in their Sauvage blankets. Once the show ended, the crowd dispersed to find various snacks in the Airstreams, ranging from mini hot dogs and hamburgers to Ahi tuna-topped salads and vodka-spiked green juices and hibiscus teas.

Soon, Solange Knowles took the stage and told the crowd, “You know, I’ve taken a break from fashion for a while because I’d been burned before, but I’m glad to come back for this.”

So was Rashida Jones, who said, “I’m gonna make my big finale flying off in one of those hot-air balloons.”