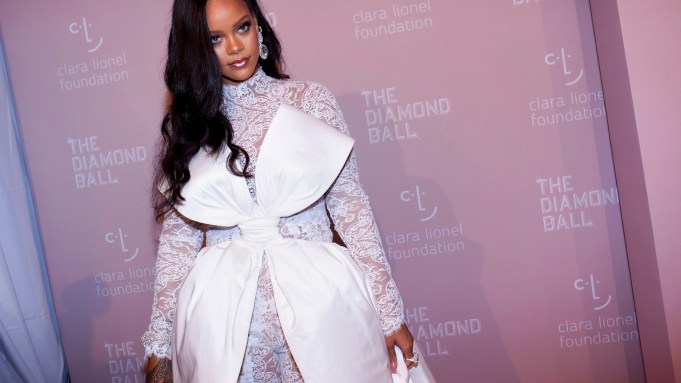 At this year’s Diamond Ball, which took place at Cipriani Wall Street on Thursday night in New York, Rihanna held court as the resident queen and apple of everyone’s eye. When she arrived at the red carpet outside the event just shy of 9 p.m., screams could be heard from the street, then a ripple of cries that, “She’s here! She’s here!” She emerged through the white curtains in diamond chandelier earrings and a dramatic dress worn with trousers underneath, a long train and a large bow. The singer and Fenty head honcho has experienced a busy past few years — her beauty line has achieved gold-medal status and she’s released a line of lingerie with Savage x Fenty. But if she could embark on her dream project, what would it be?

“Hmm,” she said, pausing at the question. “Should I tell you?”

All parties circled around her replied that she absolutely should.

About an hour prior, Issa Rae joined a roster of celebrities like Gayle King, Meek Mill, Justine Skye, A$AP Rocky and Childish Gambino on the carpet for photos. Rae stopped for a moment to talk about the writing process on her show “Insecure.”

“If I have one thing scheduled in the day, then I’ve lost a writing day. I realized that I need complete focus, I need nothing else happening to sit down and write and complete something,” she said. “And that’s coming up, after Sept. 30, I’m going to disappear and just write.

Paris Hilton, who came with her sister Nicky, took selfies with anyone who asked — but Paris insisted on holding the phone herself, in efforts to get her best angles. She pulled a powder compact out of her overstuffed Jimmy Choo clutch and redid her makeup. “Do I look sweaty?” she asked, rocking what could possibly be the largest engagement ring known to humankind.

Gucci Mane came to the Diamond Ball with his wife Keyshia Ka’oir Davis, who told reporters the moment she knew she’d fallen in love with the rapper was when “he bathed me.”

Gucci was dressed in a pinstripe suit with appliqué roses — just one of the style risks he’s recently taken.

“My style is influenced recently by weight loss,” he said of his changing look. “I try to wear the things I couldn’t wear when I was 100 pounds heavier.”

Another style risk-taker on the carpet was Teyana Taylor; she took advantage of an electric fan near the base of her mermaid-skirt to serve looks for the cameras.

“I’m just a daredevil. But that’s also the tomboy in me,” she said. “That ‘Super Sweet 16’ Teyana, little Teyana — that Teyana was the most fearless. I still feel like I have that part of myself in me now, as far as my style. A lot of stuff I was doing back then was looked upon as crazy. Now it’s accepted.”

Inside Cipriani, guests participated in an auction led by Seth Meyers and Christie’s auctioneer Lydia Fenet that raised money for the Clara Lionel Foundation, which aims to provide health care and education for all. On the auction block? Audi’s first electric car and an Armand de Brignac wine experience in France, among other things of that nature (and price tag).

After dinner, shirtless Childish Gambino took the stage to perform a mix of older (“Sober,” “3005,”) and newer (the “Feels Like Summer” series) songs, in addition to his hit “This Is America.” Writhing and twisting on stage, Gambino screamed artfully into the microphone like a preacher particularly taken by the holy spirit. The crowd felt it, too — especially Rihanna, who danced hard to “Redbone,” and was standing front and center at the foot of the stage.

When he was finished, Childish Gambino thanked everyone, with a special shout-out given to Rih.

“I love you, Rihanna,” he said breathlessly. “I love you.”

Getting Ready for Marc Jacobs With Kim Petras