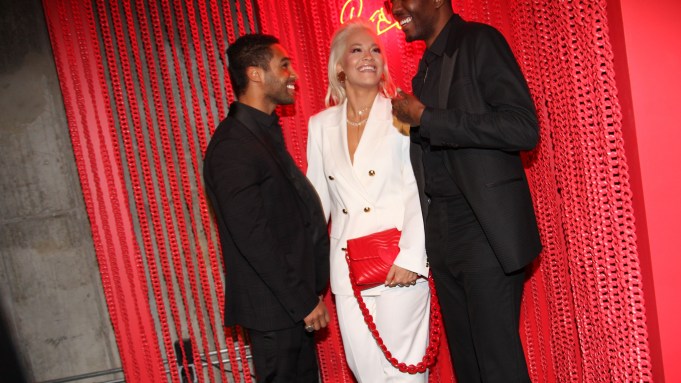 Rita Ora sat inside a bright room with wall-to-wall windows and cream-colored couches at the Public Hotel on Wednesday. She blended in well with the surroundings. The 28-year-old singer wore a white suit, her white hair was teased back into a tall bouffant and twinkling white sparkly makeup framed her eyes. The color palette was intentional, she said.

“I wanted to let my bag do the talking,” she stated.

This was her big night — the dinner party at which she would unveil her new, bright red Escada purse, which she codesigned and is one part of her ambassadorship with the brand. Ora said she has admired fashion from afar since she was a child, and it’s ingrained in her as a form of expression to this day.

“I used to flip through tons of fashion mags,” she remarked. “Especially when I couldn’t afford anything. I would rip [pages] out and stick them up on my wall and be like, ‘one day.’ And then I’d actually go and make it, try to duplicate what I saw, with clothes from the flea markets and stuff. Sometimes I would pretend it was high-end when it wasn’t. It actually worked. My friends were like, ‘Where’s that from?’ And I’m like, ‘I’m not telling you.’”

According to Ora, the conceptualizing process for the purse was pretty simple. Designers brought ideas to her and she approved — with a few caveats.

“I just said, ‘Dip the whole thing in red and make the chain chunky,’” she said, laughing. “The format of the bag is old-school. That’s been the Escada bag for a long time. They’ve obviously modernized it a little bit, with the heart [on the front]. Collaborating with them on this, I wanted to bring back some history.”

The party began shortly thereafter in the subterranean space that is Public Arts, next door to the hotel. Duckie Thot, Winnie Harlow and Leomie Anderson came streaming in for cocktail hour around 7 p.m. Escada x Rita Ora purses lined the bar, and some guests were lucky enough to claim one. Cooing over how they were “gorgeous!” a handful of folks even transferred the contents of the bags they’d brought to the party into their new accessory.

Chloé Caillet, who DJ’ed the night, wore her signature backward hat, while TK Wonder found a quiet, secluded table in the corner where she could sit and take photos of her purse in peace.

Ora was not joking about dipping everything in red. The whole room was bathed in red light, and a border of red velvet curtains lined the dining room.

The musician said among plans to travel to Kosovo for a UNICEF event, continuing her tour in Europe, and a trip back to New York for Marc Jacobs’ wedding, she’ll be attending the Met Gala in May.

The Motley, Multidisciplinary Gang at The Standard East Village

Fern Mallis Shares Her Own New York Story at 92Y