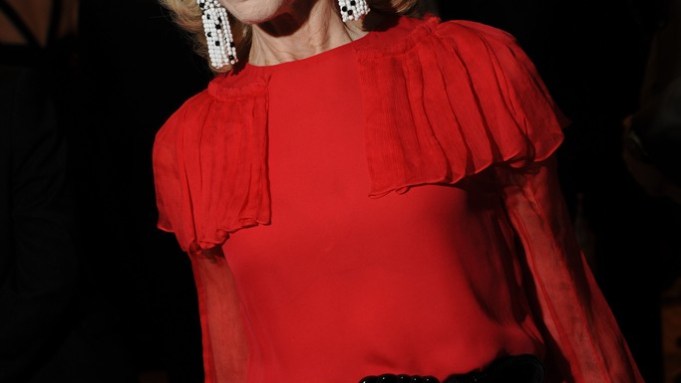 Robert De Niro was the honoree of the New York Academy of Art’s 2012 Tribeca Ball on Monday night, not that you would have known it before dinner.

“Is he here?” Solange Knowles asked, “I haven’t seen him.” The official word from p.r. was that De Niro would be arriving just before the dinner and avoiding the press. This was in fact the case: De Niro appeared after the doors had closed at the private dinner, where he accepted his tribute and sat with his wife, Grace Hightower.

Art aficionados and supporters of the academy such as Naomi Watts, Liev Schreiber, Carla Gugino and Rachel Hovnanian navigated the five-story Franklin Street building via a seemingly endless staircase. Students showed their work in a maze of makeshift stalls on each of the floors, accompanied sometimes by live performers (one woman played a ukulele near a gigantic xylophone) or wandering models in primary-colored unitards and Venetian masks. The building was not air conditioned, and the weather was unseasonably warm.

“It is very, very hot, right?” Padma Lakshmi asked as she joined several of the revelers outside the fete on the sidewalk for some fresh air. “I know heat rises,” she shrugged, “but this is something else.”

Julianna Margulies and Keith Lieberthal mingled near Richard Phillips and Allison Sarofim in the lobby. Upstairs, Jeff Koons and Damian Loeb circulated, while Will Cotton was inspecting a large-scale oil painting of a pair of severed pig heads.

“A little different than my subjects,” Cotton laughed, “though some of the colors aren’t far off.”

Sure enough, one of the lolling porcine tongues was a cotton candy shade of pink.

Michael Chow arrived just before Harvey Keitel and expertly wove through the crowd, heading straight for the dinner and dissolving into the melee.

“I just come to these things because everyone looks so damn good,” Keitel said, wiggling his eyebrows as he ducked away from photographers. Was he suddenly camera shy?

“I can’t hold my belly in anymore,” Keitel winked.

“Well, I just think art is really sexy,” Paz de la Huerta said, adding that “painting was my first passion. That and interior design. This guy here is an artist.” De la Huerta was clutching Curtis Kulig by the right elbow of his jean jacket. It was unclear whether they had arrived together, or would be staying for the dinner. “He does the ‘love me’ graffiti, he’s starting an empire…” she offered as Kulig eyeballed the exit. “I’m a filmmaker. And I know how to edit,” she mused, turning towards the street. “So I guess that’s like painting. And painting is sexy.”