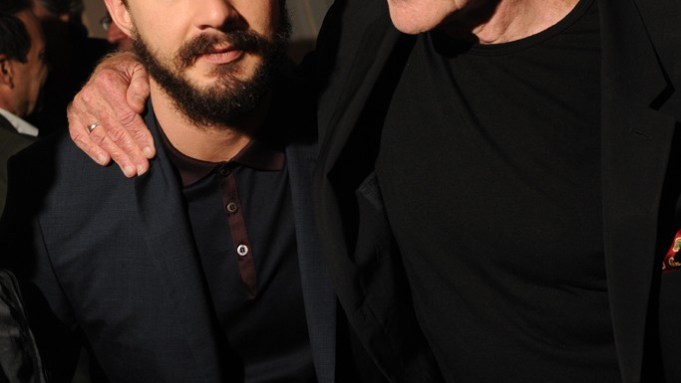 “Freud.” “007.” “A deep-sea pearl diver.” These were the contenders amongst partygoers at Monday night’s premiere of “The Company You Keep” for hypothetical secret identities they would assume should they be forced to go on the run. (For the curious, the responses were from Francisco Costa, Zosia Mamet and Brit Marling, respectively.)

The topic was on the crowd’s mind at the MoMA-held screening of the political thriller. Directed by and starring Robert Redford, the film follows a former member of a revolutionary militant group (Redford) who goes on the lam after being outed by a journalist, played by Shia LaBeouf.

Redford had nothing but accolades for the combustible young actor.

“His energy, his commitment, his fast brain. He’s got a very fast brain,” he said when asked about casting LaBeouf in the role. “He’s totally committed. He gives 150 percent and I appreciate that.”

The director obliged reporters as he inched his way down the carpet. “You good? Need anything?” a p.r. person asked Redford’s handler, hovering close by. “A glass of Drano would be nice,” she chuckled dourly.

The elder statesmen was pulling double duty on the evening as his young star declined to speak. Guests including Rebecca Dayan, Sami Gayle, Erin Wasson and Timo Weiland grinned for photographers before heading toward the theater. Costa idled briefly to take an iPhone shot of a vintage newspaper, framed on a wall outside the theater. “I’m going to Instagram it,” he explained. “But I don’t use any filters.”

As the crowd settled, Redford gave his opening remarks, singing the praises of the film’s stars Jackie Evancho, Stanley Tucci and a blushing Brit Marling. As the lights dimmed, Redford added, “Oh and Shia LaBeouf is here as well.”

Afterward, moviegoers herded over to Harlow for the after-party festivities, where trays of various Avión-concocted drinks and veggie tacos whirled by. Mamet camped out at the restaurant’s marble wraparound bar, occasionally checking out her reflection in its oceanic-themed mirrored mural behind the bartenders. Nearby, Cuba Gooding Jr. got animated at a corner table with Chris Benz, gabbing beneath a sparkling Thirties-style chandelier. Olivier Theyskens and Simon Huck held court close by, ensconced in a neighboring booth. LaBeouf punched in for a little more than five minutes, slipping away before most guests arrived. “Typical,” one partygoer deadpanned.