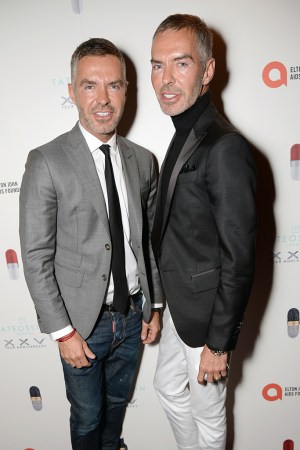 Who knew Patrick Cox would be so handy in an emergency?

At a dinner hosted at Escargot in London’s Soho by Robert Tateossian and David Furnish to celebrate the launch of Tateossian’s new Pill XXV capsule collection, society fixture Nancy Dell’Olio’s long black hair caught on fire at one point, creating a shocking flaming halo. Then, Cox sprung into action to extinguish the blaze.

“What else was I going to do?” the shoe designer said. “I’m a gay man; I put women on a pedestal. I saw one burning, so, of course, I was going to help her. I took her to the bathroom to calm down. I mean, I wouldn’t let my worst enemy stand there burning.” That’s good to know.

A minute later, while guests were still standing slack-jawed in surprise, the fire alarm sounded. “Talk about comic timing,” deadpanned Saks’ vice president and fashion director of menswear Eric Jennings, who was less than a foot behind Del’Olio at the time of combustion. “Cox is the hero. I just blew out the candle.”

“I felt a little heat,” said Dell’Olio after the drama. “I was more worried about my Nico Didonna dress, really, so I moved away but the candle caught my hair.”

Other guests included Baby Mori founders Akin Onal and Chip Gasser, Oswald Boateng, stylist Fiona Rubie, Lady Victoria Hervey, and Dean and Dan Caten, who got home at 5 a.m. that morning following their party at the Canadian High Commission. “We went to The Box after the party,” they said. “We went somewhere after that but can’t remember where.”

“I could have thrown a lot of money at a party for my 25th anniversary but, you know, there are more important things,” said Tateossian, who will donate 30 percent of the retail price of the collection to the Elton John AIDS Foundation. “There have been such advancements in medicine that a pill can not only cure AIDS but prevent it, too. This [collection] is something that I see as ongoing; instead of red and white, they can be green and blue. Instead of diamonds and rubies, they can be emeralds and sapphires.”

The Pill will be available in two versions — a micro pavé of black and white diamonds set in silver with an 18-karat gold band, or in red and white enamel on stainless steel. The range, available in July, includes cufflinks, a bracelet, a necklace and a pin.