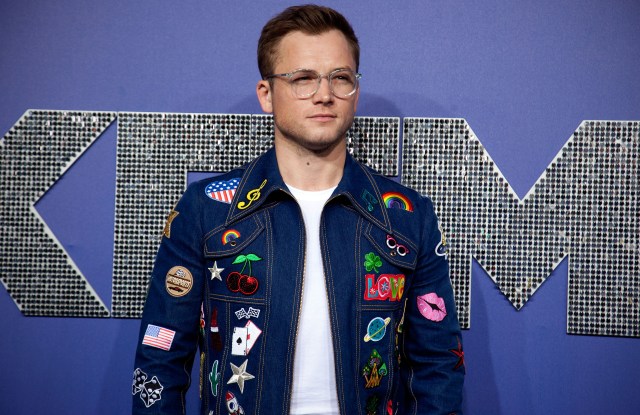 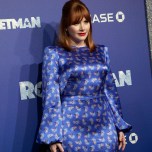 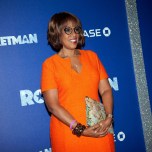 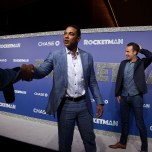 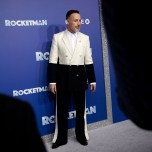 Buckle up: “Rocketman” has officially launched. After premiering at the Cannes Film Festival earlier this month, the Elton John biopic headed to Alice Tully Hall Wednesday night for the film’s New York premiere. The evening went like this:

5:18: Walking by the Mandarin Oriental, I notice a lineup of black SUVs and a small crowd gathered behind metal barricades on the sidewalk. “What, is Richard Madden staying here or something?” I wonder, and then notice that the burly security guys are all wearing “Big Little Lies” lanyards. Yes: the show’s season two premiere is just next door, at Jazz at Lincoln Center. This is tough competition: “Rocketman” is big, but “BLL” has Meryl. And Nicole Kidman.

5:28: Inside the hall, a crowd of fans is installed in the carpet’s backdrop. They are all dressed to impress: colorful tinsel wigs, bedazzled star-shaped sunglasses, feather boas. Some are wearing Elton John Ts. Most are holding cutouts of star Taron Egerton’s head on a stick, and one woman is holding a fake microphone. Further down the carpet, another woman is holding an inflatable saxophone. If only there were inflatable chairs, too.

5:29: The fans are all singing along to John’s top hits, blasting from the sound system. These lucky few won the opportunity to stand there via trivia questions on Twitter. “Some people won through the radio,” added one man.

5:30: Official start of arrivals. Nothing to see here.

5:42: The fans start screaming — they’re just hamming it up for a social media vid. What comes around, goes around.

5:59: The film’s composer Matthew Margeson is the first to arrive. His blue suit matches the carpet backdrop, which is a nice touch. “I’ve been playing piano since I was five, so I grew up playing Elton John in the house, so I was quite familiar with the catalogue,” he says. “After working on this I have to say my relationship with ‘Goodbye Yellow Brick Road’ has now become close to my heart.”

6:12: Bernie Taupin is the next arrival, as “Tiny Dancer” plays, again. With such a vast discography, you’d think there’d be more musical variety tonight, but no.

6:25: David Furnish is here, sans Elton. The pair were in Rome for the Gucci cruise show the day before.

6:31: “Tiny Dancer” plays again, but it’s OK, because here’s film choreographer Adam Murray, and he’s signing all the fans’ posters. “Taron as a dancer: he will openly say that dance is not his forte, but what he is, is he’s an open, passionate individual and very musical,” says Murray of working with the lead actor. “It’s all about musicality for him.”

6:43: Tan France and Antoni Porowski walk the carpet holding hands, which is sweet.

6:46: Producer Matthew Vaughn is no stranger to working with Egerton; he directed him in all three “Kingsman” movies. “He can sing, he can do raw emotion, he can do tantrums, he can do sensibility, but more importantly he had the integrity that I needed for this role,” says Vaughn. “And he’s a friend, so when you work with friends, life’s a lot better.” Oh, and the new Kingsman collection: Vaughn was wearing one of the pieces. “This is in the film,” he added of the velvet jacket. “Go online and buy it.”

6:51: The fan pit is having a good night. Richard Madden takes selfies with all of them!

6:53: “I think I’m done,” Taupin declares to his publicist escort, which is sad, because it’s not quite true.

6:56: David Furnish is lovely, and delivers a raving review of Egerton’s performance. “Taron did brilliantly. He absolutely nailed it. Not in an impersonation, but more in a spiritual kind of thing. Someone described it as saying it’s like becoming Elton John on a molecular level. And that’s really what it felt like,” says Furnish. “It was kind profound for me when I saw it, very impressive. It was very emotional, and slightly scary because I didn’t know Elton during that time in his life when he was so unhappy and he was so off the rails, so that was a little frightening. But also incredibly inspiring to know that he got through it all, and when I met him nearly three years sober, and in a really healthy place to start a relationship.”

Another question: does Furnish have a favorite Elton John song?

“My favorite Elton John song is probably ‘Someone Saved My Life Tonight,'” says Furnish. “I hate to think of a world without him, and it’s such a beautiful song.”

6:58: Valentino walks by, greeting producer Claudia Schiffer at the end of the carpet with a hug. Director Dexter Fletcher follows closely behind, as does Jamie Bell, who plays Taupin in the film.

7:00: There are chants of “Taron” as lots of mingling (networking, perhaps) occurs at the end of the carpet. Tate Donovan introduces Madden to his gal pal, Madden and the composer chat for a bit. Madden’s publicist gingerly plucks an invisible piece of lint off his double-breasted black suit.

7:07: Egerton finally makes it to the end of the carpet and gets to chat with his buddies. He looks pretty elated; the film has gotten a nice reception since premiering at Cannes, which surely helps put some wind in the press tour sails. Furnish admires Egerton’s patchworked jacket. (And according to an Instagram, it’s new.)

7:09: Clive Davis is the red carpet’s caboose as the crowd files into the theater and takes their seats. There’s a DJ onstage; he’s playing Ice Cube.

7:20: The cast takes the stage. “This movie’s not just about Elton John,” says Egerton, right before the film begins. “It’s also about the legend that is mister Bernie Taupin.”

LATER: The “BLL” premiere might have had Meryl, but the “Rocketman” after premiere got Freddie Mercury. “Bohemian Rhapsody” star (and Oscar winner) Rami Malek stopped by Tavern on the Green for the film’s after party. That’s rock ‘n’ roll for ya. 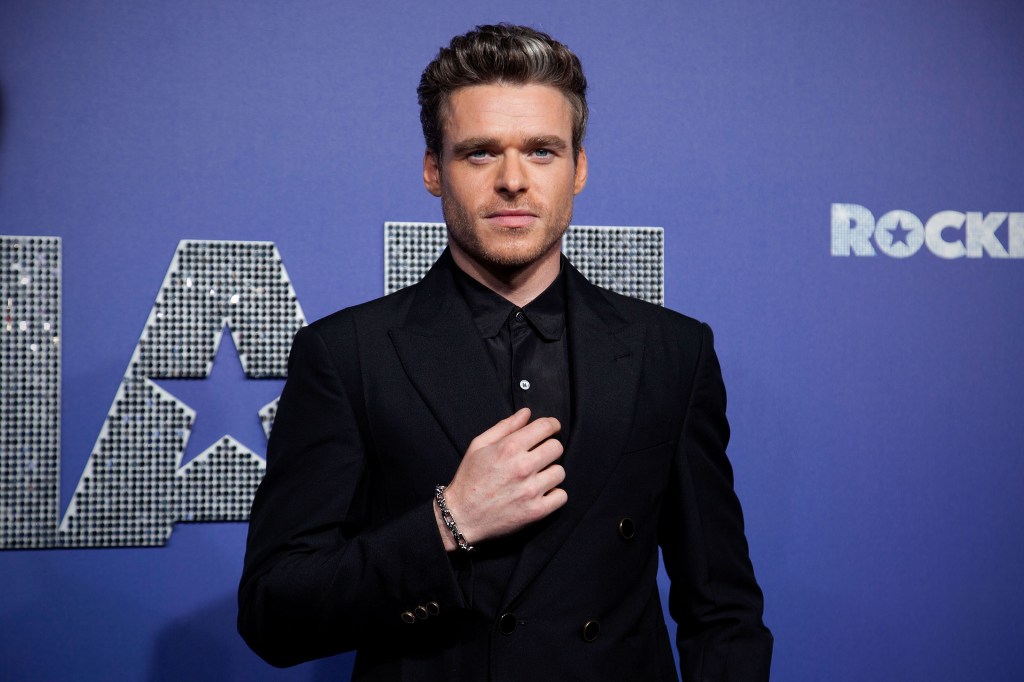