Rocking Out at the Art of Elysium’s Genesis Benefit 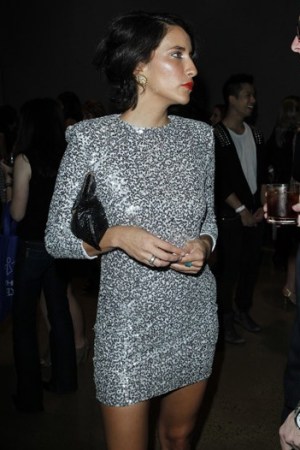 Upon arrival at Milk Studios in Hollywood for Art of Elysium’s second annual Genesis benefit Saturday night, guests were faced with a slew of crucial party decisions.

Did they want sugar-free or regular Red Bull and vodka cocktails? Jeggings or straight leg jeans courtesy of Paige Denim, one of the evening’s sponsors? Bottled lattes or tea from Coffee Bean & Tea Leaf, another sponsor?

Together it felt a little like a giant swag suite, but a sponsor’s a sponsor and the more people and companies supporting Elysium, which brings creative workshops to seriously ill kids, the better. (The organization is also holding an online auction on CharityBuzz.) Plus, there was more to do than exploit the freebies.

Riley Keough (sporting a dark, super short ‘do) chatted with one half of the Veronicas and Nicky Hilton touched up her makeup at the bar in a separate room, where artist Davida Nemeroff’s video installation of the Gulf waters post-BP was projected across a wall. Later, Justin Bartha, Anouck Lepère, Topher Grace and Oliver Hudson watched performances by Butch Walker with Jake Sinclair and band Fitz & The Tantrums.

The latter featured Noelle Scaggs, an electric and energetic singer who could have brought down the house, were she not having to remind the majority of the crowd to stop talking and start listening. Maybe next time they’ll realize the cause is about more than free jeans.