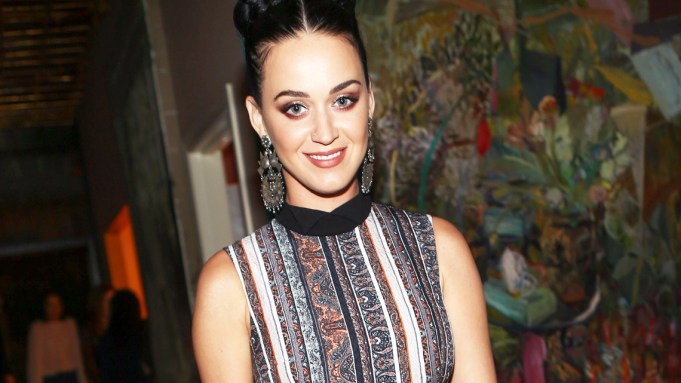 The Mulleavy sisters have many fans — the actresses (Kirsten Dunst, the Fannings, etc.), the musicians (St. Vincent, et al.), and of course the models (Suvi Koponen, Langley Fox). It made for an eclectic group on Monday night when the Mulleavys brought their besties together for an intimate dinner celebrating their “co-lab” collection for H&M sister brand & Other Stories, in stores Thursday.

Held at artist Elliott Hundley’s loft and studio in The Brewery Art Colony, the dinner, cohosted by Dakota Fanning, brought the art, fashion and music worlds together for a laid-back evening free of the forced vibe of other fashion dinners. Singers Jenny Lewis,  St. Vincent (née Annie Clark) and Katy Perry were there, as was Catherine Opie, Autumn DeWilde, Kim Gordon, Miranda July, gallerist Shaun Regen, models Lily Stewart and Koponen and stylists Shirley Kurata and Samantha McMillen. Representing young Hollywood along with Dakota Fanning were Riley Keough, Bella Heathcote, Rowan Blanchard, Zooey Deutsch, Nathalie Love, and Odeya Rush (Dunst was at SxSW). “I feel so fancy being a hostess and not just a guest,” said Fanning, who, along with sister Elle, has been wearing Rodarte since tweendom.

Each guest had a personal connection to the designers (although Clark, who came with Lewis, said “I’m just a professional plus-one”). But the Mulleavy sisters are nothing if not hands-on, so they suggested to longtime pal Hundley the event could also be a farewell dinner of sorts – the artist and husband Alphaeus Taylor are moving to a new building in Chinatown next month after a decade in their downtown Art District home. The dinner was held in the couple’s soon-to-be-former home, as a last hoorah of sorts.

“You have to really take a minute to walk around and absorb all the details,” said Kate Mulleavy. “There’s a lot of colors and textures going on.” She was referring to Hundley’s artwork displayed around the dining room; it made for quite the complement to the Rodarte ready-to-wear most guests were sporting. Laura Mulleavy described the & Other Stories collection as, “still that casualness that is California, but with the simplicity and edge of Swedish style.”

“This is actually our TV room,” Hundley said of the makeshift dining room, cleared of its contents to make way for a long dinner table.  The room was large enough to resemble a museum gallery — filled with his large-scale paintings, collages, sculptures and mobiles (but, there was a flat-screen TV tucked in a corner).

And most guests clearly felt right at home. “I’m planning to take one of these beautiful flower arrangements with me when I go,” said Lewis, eyeing a vase of garden roses. “It’s like at a wedding.”