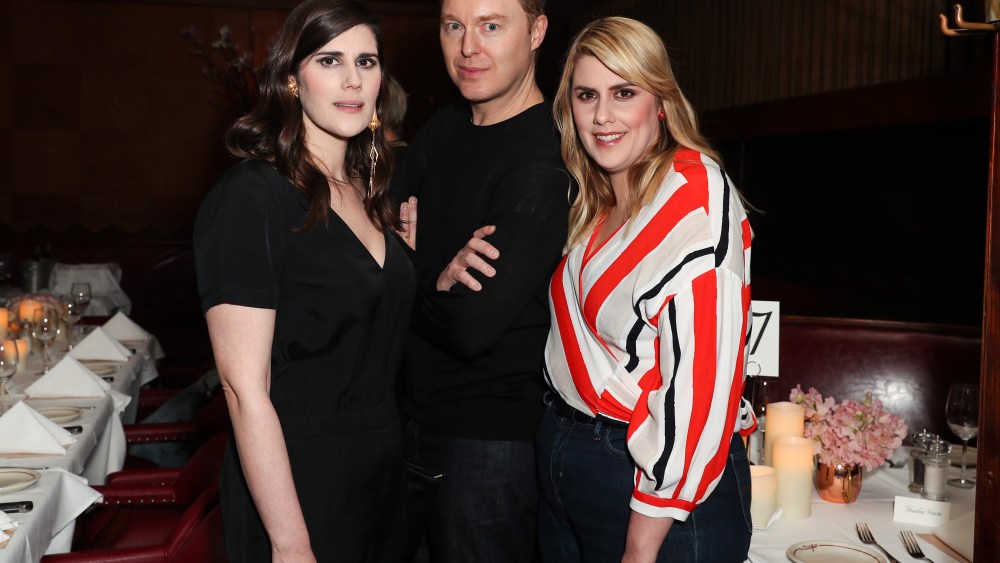 It was like a scene out of an old Hollywood movie gliding up to the mahogany bar where Coach executive creative director Stuart Vevers calmly sat sipping a drink before the guests began arriving to celebrate the brand’s collaboration with Rodarte.

“It was the first time I came to L.A. to meet with Kate and Laura [Mulleavy] and we came here for dinner,” Vevers said of Musso and Frank. “It’s one of their favorite places and they suggested we come here and I absolutely loved it. I love an old-school classic.”

The restaurant, serving up American fare in a setting oozing with Hollywood history, was the scene of a dinner Thursday evening to celebrate the collaboration between Coach and Rodarte. The collection, due out next month, features embellished leather bags, jackets and dresses among other items, some of which were donned by the evening’s guests who included Chloë Grace Moretz, Rashida Jones, Langley Fox Hemingway, Kim Gordon and Selma Blair.

The restaurant quickly filled as guests swarmed the three designers, while waiters passed around shrimp cocktail, stuffed celery and crab cakes before the party settled into the nearly 100-year-old venue’s red leather booths for dinner.

“Kate and I love powerful, independent intelligent women and since it’s in Los Angeles it kind of feels like a friends and family dinner with people that we know or women that support Rodarte,” Laura Mulleavy said of the group assembled Thursday.

The Rodarte and Coach collaboration — a mash-up of what could be viewed as old and new — came as a surprise to some at the time of the announcement.

“I was actually surprised that people were surprised given the direction of Coach since I joined,” Vevers said. “We really wholeheartedly embraced fashion, but I think it was maybe a sense of the established heritage brand with the younger avant-garde fashion house and I think in many ways though when it came down to it, it was me, Kate and Laura in a room together. And we were just creatives playing rather than thinking about our brands.”

That literally was the process as the three designers largely holed themselves up in Vevers’ room at the Chateau Marmont during the process of creating the collection, rifling through fabric swatches, colors and archived pieces.

“We talked and got to know each other even more,” Mulleavy said of that initial meeting at the Chateau. “I think out of that stemmed a dialog about things that we wanted to do and [Stuart] had brought some research materials on Coach about the brand and that immediately sparked an idea on how to work with an archival piece that they had and how to translate that for now and into something fun.”

For the Mulleavy sisters, once this capsule is out of the gate, the two will turn their full attention on the next Rodarte show.

As for Vevers, the creative director demurred on details of future Coach collaborations, specifically the much-buzzed about one with Selena Gomez, only confirming there are more to come: “Nothing to reveal right now, but I’m excited about doing new things and pushing boundaries.”