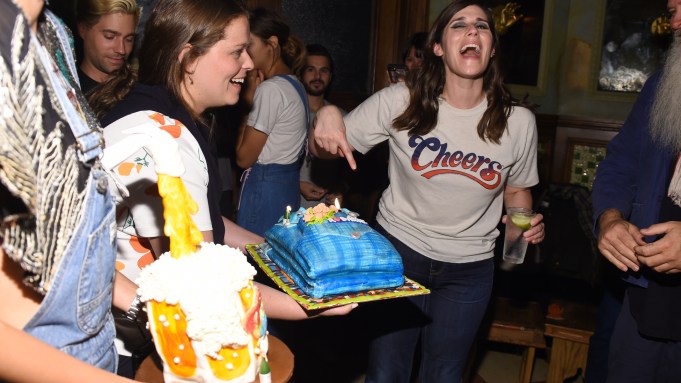 Rodarte may have shown a collection full of ethereal dresses with floral embellishments earlier on Tuesday, but at their after party, denim overalls were the reigning outfit streaming into the Jane Hotel. Not by coincidence: the theme was chosen by party DJ Zach Cowie, who was busy thumbing through vinyl records.

“He’s like, ‘You better wear overalls,’ and I said, ‘Oh, I’ll put them on.’ And I tried, but I was like I can’t dance very well in them — so I said I’ll wear a ‘Cheer’ shirt instead,” said Laura Mulleavy, one half of the Rodarte design duo. Her sister, Kate, had also forgone the denim onesie look at the party. The sisters were still processing their earlier show. “I almost feel like I didn’t do it,” Laura continued. “Maybe tomorrow it’ll catch up to me and it’ll be like, ‘Oh, you did that already.’ It’s weird,  kind of like a haze. It’s almost like when you wake up and kind of feel a little dreamlike. Like you’re in a bubble, and you have all of this adrenaline and then it releases and goes away.”

Many of the Mulleavy sisters’ friends and fans came out for the celebration of the collection. “I love Rodarte,” Leigh Lezark remarked as she ventured outside to the hotel’s roof to take in the impressive Hudson River view. Dr. Lisa Airan, an early Rodarte devotee (she wore a dress from their first collection to a previous Met Ball), was quick to praise their new collection. “I’ve been a big fan of Rodarte for a long time, and I thought this was one of the best shows,” she commented, donning a cropped “Rad” T-shirt. “I want to go to the showroom and look at it in person because there were so many ideas and details, and I thought it was really amazing.”

Around midnight, a Rodarte fashion week tradition made its grand entrance: a birthday cake — decorated to resemble a pair of overalls, naturally — in celebration of Laura’s birthday.

Friends, cake, dancing: You could say that it was a great night overall.