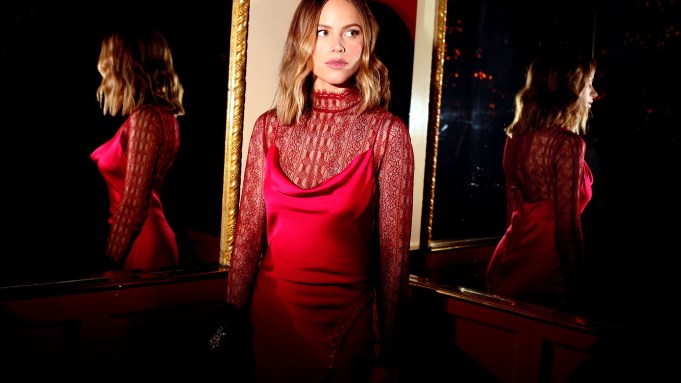 The Russian Tea Room is a tourist destination in New York City’s Midtown, like, say, the Empire State Building or the Grand Central Oyster Bar — somewhere you’d take your aunt and uncle when they come to town. But on Wednesday night, Roger Vivier, its creative director Gherardo Felloni and Inès de la Fressange transformed the third floor of the historical location for a quintessentially New York holiday party.

The brand assembled a guest list including Rainey Qualley (she performed on a small stage at the back of the room during dinner), Violetta Komyshan, Molly Gordon, Maria Borges and Jordan Roth — all of whom marveled at the room where the celebration took place.

There were huge gold chandeliers, floor-to-ceiling mirrors inlaid with gold, gold Christmas trees lining the walls and a long table running down the middle, draped in red velvet and stacked with pink and red peonies and candles.

Felloni, who designed the environment for the evening, said he got a “Twin Peaks” vibe from the room, which informed his references.

“I came up with the idea of the tree forest,” he said, pointing to the tinsel arbor. His friend and ambassador for the brand Inès de la Fressange could feel a different cinematic influence, though.

“Instead of David Lynch, I would say, rather, Wes Anderson,” she remarked, nodding.

“It’s an occasion to say hello to American clients and press,” Felloni continued. “We are in Paris, and we are quite small here, so we have to improve in America. That’s why I went to Los Angeles two days ago and now I’m here, trying to build relationships.”

Read More: K-pop and No.5 With Chanel in the Snow

The creative director, who took up his post at Vivier last year, has been billed as new blood, a breath of fresh air for the label. De la Fressange said he will bring artistry and creativity to an industry that’s become too preoccupied with the business side of things.

“Many people think that the world of luxury has become pretentious and square, and that’s totally untrue,” de la Fressange said. “It seems [for a] few decades, businessmen [have taken] importance. We know their names, we shouldn’t know their names. They’re not the creative people, they’re not the interesting ones. They’re only the ones who have money. Creative people, eccentric people, artistic people — this is what we’re looking for. Gherardo is never too stiff, and that’s good. Especially because it’s a French company; French people can be stiff. And with his Italian blood, it gives it a bit of joy and lightness.”

A little while after guests including Caroline Vreeland, (who sang along to an acoustic version of “All I Want for Christmas playing on the speakers), Soo Joo Park and Julia Schlaepfer took their seats to eat, Qualley trooped onstage to perform her original Rainsford song “Somewhere Else.”

“I feel overjoyed just being in this room because it’s so beautiful,” she remarked earlier in the night. “After this, I think my actual Christmas is going to be a letdown.”