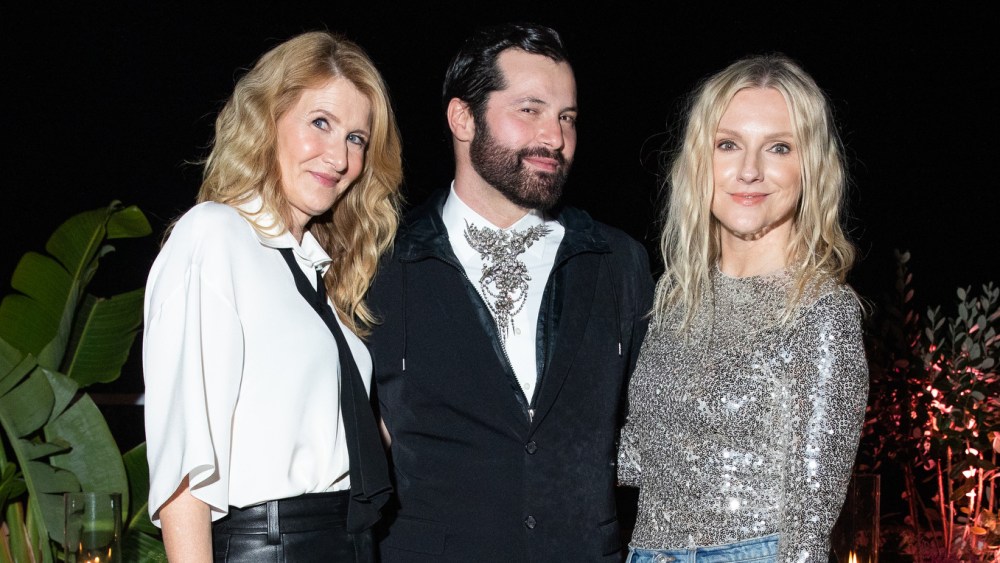 The frosted feline was one of many to-die-for Vivier accessories at the stylish soiree under the stars, cohosted by Brown and Laura Dern, who showed off her own 3D floral-embroidered sidekick.

“I’ve been in love with Roger Vivier for many years,” Dern said. “When I first became an actress and saw Catherine Deneuve wearing her iconic shoes in ‘Belle du Jour’ I thought that’s the woman, I have to wear those shoes,” said Dern, adding that she bought her first pair of Viviers in Paris when she was visiting in her early 20s.

It was a chilly night, with the glittering Hollywood Hills for a backdrop, and everyone was dressed to the nines, including Kathryn Newton in vintage Saint Laurent.

The fashion-loving “Ant Man” actress said she enjoys styling herself, but is a little daunted about doing so for the international press tour she’s about to kick off for the Marvel film.

Meanwhile, Lake Bell was looking regal in a black Oscar de la Renta party dress, and reveling in the approval she got from her daughter, Nova Campbell, who deemed her not a queen, nor a princess but a “duchess.”

It was a family affair at dinner, too, where Dern brought daughter Jaya Harper as her date. (Dern chose pink pumps for the night, while Harper wore buckle boots.)

“What you have done with the brand and your whimsy and irreverence, but with such respect for what has come before is incredible,” Dern told Felloni, who was feeling a little starstruck meeting his idol in person for the first time.

“Don’t forget, I’m going to be pathetic now, when you have dreams and you are alone in the middle of nowhere, people like you help a lot. Many younger girls and boys like me, they need you. Please do your job with passion and love and never forget it’s about business and money but it’s about saving people,” he said during a toast, alluding to the role Hollywood can have in inspiring future creatives.

“I’m obsessed with David Lynch and everything started from there,” the designer explained over tea earlier in the day of how he first fell in love with Dern after seeing her in Lynch’s 1990 film “Wild at Heart.” “She’s one of the best in Hollywood…and she became a sex symbol because of the shoes,” he added of her iconic red heels in the film.

“I love cinema, it’s my passion, and opera, too, I’m a tenor,” he continued. “In this moment when everything is becoming really politically correct, in acting you still have the chance to explore difficult things. That’s the medium of theater for millions of years. And at Roger Vivier I capitalize a lot on that because the success was always about cinema.”

Indeed, the last time Felloni was in L.A. in 2019, he brought his roving brand experience Hotel Vivier to a 11,000-square-foot, Holmby Hills château, where each room was kitted out in cinematic form, including the pale pink hotel reception with cubbies full of Très Vivier pumps, that looked like something out of Wes Anderson’s “The Grand Budapest Hotel.”

That was pre-pandemic, of course, but while fashion pundits may have been quick to pronounce the death of high heels, Felloni said that was premature. “A year ago, it was just sneakers, sneakers, casual, casual,” he said. “Now, it’s evened out. And I’m a big fan of kitten heel.”

And kittens, as it turns out — at home, he has nine.

Roger Vivier doesn’t yet have an L.A. store, but sells out of a shop-in-shop at Neiman Marcus Beverly Hills. Still, the designer isn’t giving up hope of having a home on Rodeo Drive, which is quickly being gobbled up by LVMH Moët Hennessy Louis Vuitton for stores, restaurants and the Cheval Blanc hotel.

Felloni has been trying to nudge his boss, Diego della Valle. “I told him, let’s open a Hotel Vivier.”