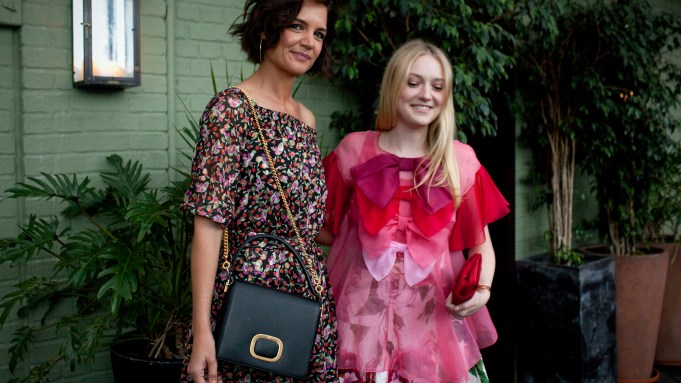 Ah, the allure of a pink party. Who could resist?

Certainly not Dakota Fanning, who donned her springy best and came out to the celebration of Roger Vivier’s #LoveVivier book launch Thursday evening.

“When I saw the book and saw that it was pink I was like ‘OK, I’m sold,’” Fanning said, seated beside a friend she’d brought along for the night on the Gramercy Park Hotel’s terrace. “I’m a girlie person; I’m a sucker for baby pink items.”

Fanning, who was joined by Katie Holmes, Cindy Bruna, Martha Hunt, Kelly Rutherford and more for the celebration of the Rizzoli book, which pays homage to Vivier’s influences, woven with today’s digital influencers.

Fanning cited the brand’s classic nature as something she gravitates toward; her personal tastes are aided by her stylist of six years, Samantha McMillen.

“She knows me well by this point,” Fanning said. “There’s time when I just want to be done with trying on the clothes, and so she’ll have to push me to trying something on or to give something a chance. I think we pretty much agree on most major things. But I don’t like trying on clothes. It’s fun for the first two, it’s fun to look but then you’re like ‘Oh, god.’”

Following the party, she was off to Cape Cod for the weekend, for the wedding of her boyfriend’s brother. “I have a summer trip planned but yeah, enjoying New York in the summer after the long winter,” she said.

For Holmes, “it started with a pair of red patent leather flats. And then Bruno [Frisoni] made my daughter a pair of really beautiful little shoes, when she was very little. Then I played Jackie Kennedy twice and she was such a fan of the brand.”

For her summer travel, Holmes will be returning home to Ohio and Michigan “for a big family weekend. We’re going to be on a lake and going boating and swimming and that’s the best,” she said.

The book was commissioned, brand ambassador Inès de La Fressange said winkingly, “to show off — to show that we’re really successful in Asia, or in America, or in Europe. It’s a book about vanity…no, but we’re proud of the success.”

Morgan Saint and the Art of Self-Expression