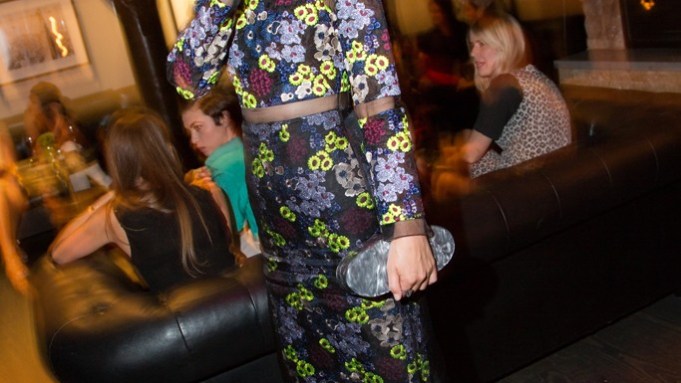 “It was an incredibly elaborate, hugely flamboyant wedding,” Dan Mazer told the press line at New York’s Crosby Street Theater on Tuesday night. The writer-director was explaining the genesis of his latest flick “I Give It a Year,” about the realities of the first year of marriage for a mismatched couple. The pair, played by Rose Byrne and Rafe Spall, lack the support from their family, friends and even their marriage counselor. Mazer continued to speak of the film’s inspiration — a friend’s failed marriage — while moviegoers (Hilary Rhoda, Jodie and Danielle Snyder and Sophie Auster among them) found their seats inside the theater. “There wasn’t a single person in the congregation who thought it would last more than a month. And it didn’t.”

Byrne soon made her way down the red carpet, beaming in a floral Erdem dress.

“I just loved the novelty dance at the beginning,” the smiley actress said, on her favorite part of the film, a hilarious, albeit shudder-inducing, scene in which Byrne’s new hubby raps through their first dance at the couple’s wedding. “I was cringing reading it, but also laughing out loud.”

The laughter soon became communal as the film rolled with the audience roaring throughout (the wildly inappropriate best man’s toast was a particular favorite). After the premiere, guests dumped their popcorn and headed over to The Dalloway for a small after party where Mazer told partygoers of the surprising phobia of Byrne’s that came to light in a scene involving the release of doves, in a romantic gesture that goes awry.

“But what Rose hadn’t told us before we started filming was that she has a paralyzing, crippling fear of birds, so she was literally frozen on the spot as soon as they came out. I think at one point she cried, which isn’t necessarily that funny, but we can laugh about it now, can’t we?”