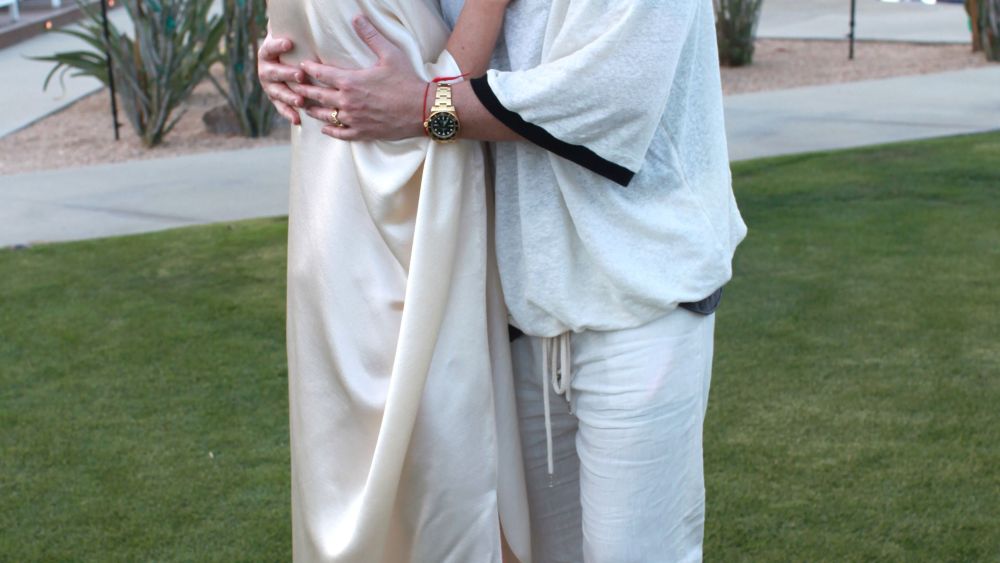 Leave it to Rosetta and Balthazar Getty to class up Coachella. The fashion and arts-centric couple threw together a last-minute private tour of artist Doug Aitken’s “Mirage” installation on Friday afternoon, followed by a glamorous dinner at Michelin-starred restaurant So.Pa at the L’Horizon resort in Palm Springs.

“We’d been wanting to bring fashion and the arts to this weekend for some time, to make it more inclusive of not just musicians and celebrities,” said Balthazar Getty. The actor-music-producer-DJ had a pre-planned gig manning the turntables at Katy Perry’s Easter Sunday brunch, so he and his wife decided to celebrate Desert X, the inaugural art fair centered around 90 site-specific works within a 45-mile radius of the Coachella Valley.

The main attraction of the fair, which has included works by Richard Prince and Lita Albuquerque, has been Aitken’s mirrored house “Mirage” (see: Instagram). The press-shy, Los Angeles-based artist led a group of about 20 of the Getty’s friends and their four kids on a tour of his work an hour before it opened to the public for the day (admission to the Neville Wakefield-curated Desert X is free).

“I think art should be many things, and that also talks to ‘Mirage.’ This was a work that has no doors, it has no windows, and depending on when the sun hits it, it changes constantly,” he said. “The one thing I’d request is if any of you have a chance to come back here, visit it again because it will be very different next time you see it.”

Said Rosetta Getty, “I just love this Desert X project so much, so it all just came together. Our [fashion] collection this season was about reflection and the glass house was all about reflection and what you see is isn’t always what it is, so it seemed like something I really needed to support and shine light on as much as I can.”

She partnered with online retail platform Orchard Mile to host the dinner, which started at 5 p.m. to accommodate guests who wanted to get to the first night of the music festival. Many stayed in the same clothes they wore to the art tour, but Getty changed out of her black palazzo pants into a while silk caftan and gold mules that matched the resort’s pristine midcentury architecture and landscaping.

Unfortunately, things got a bit rowdy at the poolside bar cocktail hour and a bottle of homemade bitters ended up shattering on the ground and staining her hem. As bartenders poured club soda on it, Getty said, “Oh, don’t bother. I can fix it.” It was, unfortunately, the last remaining sample, as the rest of the dresses had sold out. “Are you sure, mommy?” asked her youngest daughter June.

“She’s getting the Easter Bunny and some other surprises,” whispered Getty, of her family’s plans to spend the holiday in the desert. Several other guests, including Shiva Rose, Lady Mary Charteris, Joséphine de la Baume and Annabelle Wallis just sprinted up from Los Angeles for the day. Johnny Wujek and Markus Molinari were committed for Coachella, both DJing at Nylon’s midnight garden party that evening, and producing their friend Perry’s Easter Brunch. Erica Pelosini and husband Louis Leeman were also in for the entire weekend. “We really want to do something out here for our shoe lines,” he said. “Maybe next year we’ll have our own event.”