The beauty of the Tuscan countryside added an exclusive air to Rosetta Getty's Independence Day celebration in Italy. 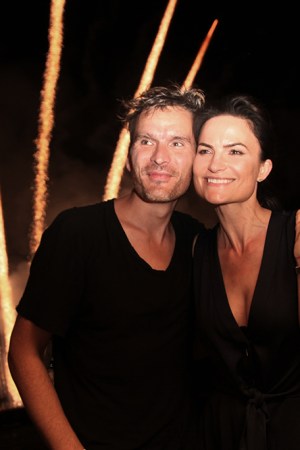 The beauty of the Tuscan countryside, the authentic charm of a 16th-century villa nestled among vineyards, olive groves, cypress and oak forests, a crew of friends with notable last names and impressive resumes – all contributed to create the chilled-out, yet exclusive atmosphere during the weekend organized by Rosetta Getty to celebrate Independence Day in Italy.

“We are always here for the Fourth of July and we always celebrate, so I decided to make it a bigger celebration. I’m in Italy for at least six weeks every summer so Italy is my home away from home,” said Getty, who chose Sting and Trudie Styler’s villa, Il Palagio, located in the hills south of Florence, as the setting for the event, which was co-hosted by Farfetch. “I love entertaining, I love making people get together, I love meeting people, so for me it’s fun. I like to have people feeling loved, comfortable and welcomed. I thing that this is a real party with family, kids, friends.”

The designer revealed that she is talking to a bathing suit company about introducing swimwear in her collections, “you know, being from California…” Over the two days Getty allowed her guests to experience a real Italian summer weekend, lunch under the trees, aperitivo in the garden and picnic by the mansion’s private lake included. The only exception to the true Italian atmosphere was Saturday’s dinner menu, which included Indian food served next to the Indian-style gazebo with dance floor music curated by Mia Moretti, Simon Taylor-Davies and Rosetta Getty’s husband, Balthazar Getty.

Getty said he is very focused on developing his music career, but is also finishing writing a screenplay for a movie, which he said should be ready next May. “It’s about a boy who loses his parents in an accident, while they are going to visit him at boarding school. So he is raised by his father’s best friend,” he revealed.

His sister Anna Getty attended the event with her fiancé Scott Ostler. The couple is getting married on Aug. 22 in Big Sur. “We are having our honeymoon one month later. We’ll go mountaineering in Utah. We have a one-year-old baby so we cannot take to much time away from him,” said Getty, who is setting aside her career as an actress to focus on her four children.

Rosamund Pike recently also took a break from the set. “I’ve been on an extended maternity leave and I’ll be back to work in September,” said the British actress. “We have just been in Shanghai, and it was my first time in China. I think it’s extraordinary because you have the feel it’s a country pushing what’s new and I’m very interested in Chinese culture. My partner actually speaks Chinese and last year I gave myself a Chinese name, “Pei Chun Hua.” The actress explained that Pei is a surname, Chun means something like frank, open, honest, while Hua is the word for China but is also associated with flowers. “A lot of Chinese actors give themselves a Western name, so I thought, why not do the opposite?” she exclaimed.

Actress Patricia Arquette said she’s in the middle of an Italian grand tour.

“We have been traveling through Italy for a few weeks – Taormina, Apulia and Positano,” said the Hollywood star, who doesn’t stop working even when on vacation.

“I’ve just directed a video for a single from Balthazar’s new album,” said Arquette, who has recently signed up be a voice in the upcoming “Toy Story 4.” “I’m very excited about doing a cartoon. I’m also working on CSI Cyber, which is, of course, a great global franchise – and to be the first female lead in a CSI is awesome.”

Arquette, who was wearing a black-and-white Rosetta Getty dress when she won the Oscar for “Boyhood” in February, is said to be extremely close to the fashion designer. “She was the first person I’ve ever told I wanted to be an actor. We were sitting in her room, we were seven and eight, she asked me ‘what do you want to do when you grow up?’ I said I wanted to be an actor and she said she wanted to be a fashion designer. Now she is in fashion, I’m an actor and this is the moment when we are doing what those two little girls fantasized about.”

A group of young and beautiful girlfriends also animated the party on Saturday night under spectacular fireworks. Among them was Moretti, who arrived in Tuscany directly from a week with Cleo Wade and other girls around the Greek Islands. Tali Lennox, who is gearing up to develop a project with Levi’s, also attended, as well as Phoebe Collings-James, who is heading next week to Jamaica, his father’s native country, for the first time.

“I’m the proud owner of a new home in Los Angeles,” said Dree Hemingway. “I’ve started decorating it, and I’m really into Spanish minimal – a lot of wood, very clean, a mix of masculine and feminine that is very much my style. I think less is more, but everything needs to be comfy and cozy. I’m actually very inspired by clothing and stores, like Celine, Chloe and Isabel Marant.”

Los Angeles is also on the map of French actress Gaia Weiss. “I’m flying to Los Angeles for the first time at the end of the month to start a new career in Hollywood. It’s my first step into America.”

The U.S. is already the adoptive county of Norwegian model and fashion personality Hanneli Mustaparta, who was in incredible shape in a chic, elegant Rosetta Getty white dress. “People don’t imagine it, but I love food, I think that is so important,” she said. “Here you can really get fresh products, which taste so differently from the things you buy in New York. Next time I come to Italy I want to learn how to cook the perfect veal Milanese.”

Footwear duo  Erica Pelosini and Louis Leeman also showed at the party. The couple will be celebrating their first anniversary in Portofino next week. “We are developing a project with a super celebrity and we are also planning to introduce the first men’s wear collection, which will be presented next June,” said Pelosini. “Everything will be made in Italy, because it needs to be in line with the footwear collection and also reflect a certain kind of lifestyle.” – Alessandra Turra