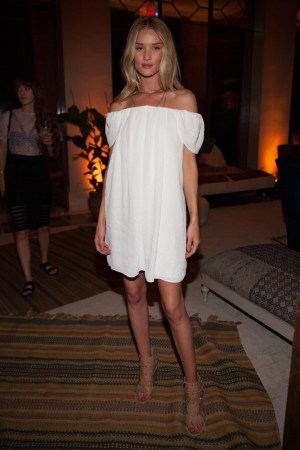 While the Coachella stages were throbbing with the likes of Girl Talk and Martin Garrix, a few privileged partygoers took a different—and far more laid-back—approach to the festival, relaxing at the Desert Sunset Social at Soho House’s second annual Coachella pop-up. Hosts Rosie Huntington-Whiteley and retailer Forward by Elyse Walker welcomed guests including Ashley Madekwe and Riley Keough to the sprawling Merv Griffin Estate in La Quinta, where they were encouraged to refresh and recharge overlooking the retreat’s private lake. “I wanted to show face and have fun. Sometimes you need a little break from the festival,” Ireland Baldwin said.

“Coachella started off as a music festival—which it still is, but it is probably as big as New York Fashion Week in terms of fashion,” said Walker on why she chose to throw a party there. “I’ve been [to the festival] the last six years. I never plan on it and I always end up here,” said Keough.

Sisters Scout and Tallulah Willis were among attendees laying in the grass or playing ping-pong. “I’ll probably spend most of the weekend here,” mused Tallulah. “To be honest, it was a very last-minute trip,” her older sister piped in. “I don’t even have tickets to the festival yet, I’m just waiting to see what happens.”

As staff dressed in RVCA uniforms served finger food to guests, Huntington-Whitely talked about her plans for the rest of the weekend. “Tomorrow I’ll be going to my friend Alex Wang’s party, and I’m really looking forward to Outkast this evening, and Calvin Harris on Sunday.”  Added Madekwe, “I’m really excited to see Outkast too. It’s all downhill from here.”