The diva capped off a gala night to benefit the French museum. 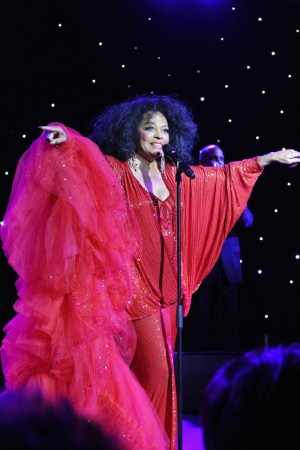 “My feet are going to pay: It’s pulling me to the ground,” Milla Jovovich said of her glittering Saint Laurent T-shirt gown, paved in dense silvery crystals. She let a reporter hoist a bit of its skirt to prove she wasn’t exaggerating. The actress said a heavyweight role awaits her — portraying controversial German filmmaker Leni Riefenstahl in an independent movie called “Flicker of Light,” due to start filming this fall.

“How often does one dine at the Louvre?” enthused Bond girl Olga Kurylenko, her curves packed into a densely knit bustier dress by Azzedine Alaïa. The French actress is on a break from filming “Vampire Academy: Blood Sisters,” and therefore bore no fangs or claws. “In the film, I have nails that are like this long,” she said, extending her slender fingers to demonstrate.

Bianca Brandolini, who arrived on the arm of Valli, said she would be treading the boards in Paris next spring, playing a student in the French adaption of Jenny Lyn Bader’s play “None of the Above.”

“We’ve decided we’re only going to parties thrown by Texans,” Macklowe enthused. “They’re the most fun.”

As if on cue, Thrash related details of one of her pre-gala parties.

“Honey, last night we had The Gypsy Queens playing at the Senate,” she said, describing dancing-on-tables euphoria. “I think we can safely say that’s a first.”

Surely hearing Diana Ross perform a medley of hits under the I.M. Pei pyramid ranks up there, too.

“Do you remember this one? Are you too young to remember this song?” Ross said to the rapt audience just before breaking into “Stop! In the Name of Love.”

The event, organized by the American and International Friends of the Louvre, raised just less than $3 million, designated for the restoration of the Roman-Greco antiquities galleries.