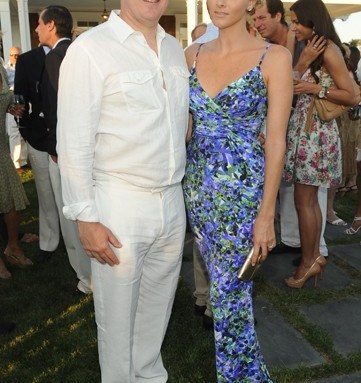 Jay McInerney and Anne Hearst opened their Water Mill estate—complete with roving emu—to a crowd of Hamptons regulars (and a few not-so-regulars) on Saturday night for a party to benefit the Princess Grace Foundation. The organization provides grants to young artists; “Spongebob Squarepants” creator Stephen Hillenburg is a former recipient.

Louis Vuitton hosted the summer soiree with Prince Albert who brought along his fiancée Charlene Wittstock. Albert, however, seemed to be the fan favorite as guests asked to pose with him for pictures. “Housewife” Ramona Singer literally tripped over herself in order to get to the Prince.

The Hamptons were the last stop for the royal couple who had embarked on an all-American summer vacation touring Dallas, Memphis and New Orleans—a respite before launching into wedding planning mode.

But Wittstock seems very low-key about her upcoming nuptials, scheduled for next year, even if the rest of European society isn’t. “I’m not one of those girls who imagined themselves walking down the aisle in a big dress,” she said. “My style is very easy.” Wittstock was wearing gold flip flops with her gown.