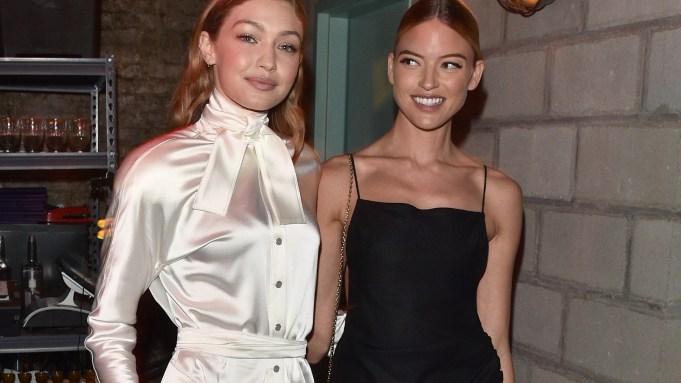 It’s the rare party at which Gigi Hadid could make her entrance — descending down a staircase into the room no less — and go unnoticed. But when the room is full of her fellow Victoria’s Secret models, giving their pouty best to photographers’ delight, such an oversight can happen.

“Oh. Hi,” a photog said somewhat startled, upon realizing who had sneaked in behind him. “You should be in that picture,” another called out to her.

Hadid was in familiar company — and yes, she did join in on the photo opp — Thursday at the party for Victoria’s Secret photographer Russell James’ new book, “Backstage Secrets: A Decade Behind the Scenes at the Victoria’s Secret Fashion Show.” Sara Sampaio, Ming Xi, Malaika Firth, Josephine Skriver, Martha Hunt, Zuri Tibby, Lameka Fox, Jacquelyn Jablonski, Lais Ribeiro and more turned out for the party at the Alley Cat Amateur Theater, beneath the Beekman Hotel, where the Aussie photographer was the reluctant center of attention for a change.

Hunt, who was off to Chicago the next day for “my friend’s concert” — that would be Taylor Swift’s two night run at Soldier Field — has known James since her first day with Victoria’s Secret.

“I’ve known Russell since 2012, because my first shoot with Victoria’s Secret was 12/12/12. I’ll never forget it,” said Hunt, who’d done a quick change between events earlier in the evening, ditching a DVF outfit that was a bit more “buttoned up” for a wisp of a Jacquemus dress, for a “sexy moment.” “I don’t know numerology, but maybe it was a sign that this was something that would turn into something more. It was in New York at Pier 59 Studios. I started off in lingerie then went to the pajama world then came back.”

The constant change between realms no longer gets to the seasoned model. “In the beginning…I put more pressure on myself to be lingerie ready. But these days I think we all feel pretty similar about the fact that we have to be ready year-round,” she said. “If I read on my chart that I have lingerie or pajamas, I’m not going to treat myself that differently, because I feel pretty ready.”

Skriver attributed her success as an Angel largely in part to James. “He always believed in me being an Angel before I became one. I owe him a lot,” said the Dutch model, who was fresh from a plane after four days in her home country.

The photographer himself, for one, was relishing his moment. “It probably took about five minutes to concept, but it probably took about 18 years to shoot,” he said of the book’s images. “[The selection process] for me was to look for images that caught the vibe and essence of what it’s really like backstage, on a personal level for the girls. The tension, the excitement and also the family vibe. What I think [people] don’t see is it’s so big in the front of the stage, but it really works because it’s a small vibe. It’s a family collective and people who get together and who get really close and protect each other. That’s what I wanted to try and show. Everybody gets nervous; everybody is vulnerable. I’ve seen Gigi, Bella and Kendall sitting in a closet, and I was like ‘What are you doing?’ and they were like ‘It’s so overwhelming.’ And I was like wow, if it was overwhelming you guys, it can overwhelm anybody. So it’s really quite extraordinary.”

Morgan Saint and the Art of Self-Expression