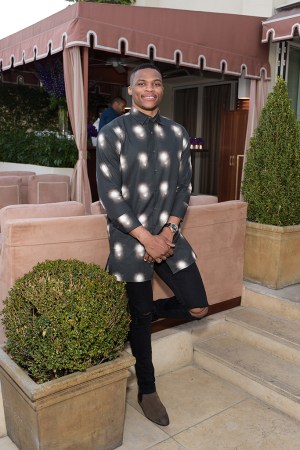 The fact that they collaborated on a swanky scent for Byredo together didn’t inure Russell Westbrook and Ben Gorham from a round of trash-talk.

“I was a little bit better than Russell in my prime,” boasted Gorham, the founder of Stockholm-based Byredo, recalling his years playing on various pro basketball teams in Europe. During the process of perfecting their eau de parfum, called Byredo Westbrook, which entailed meeting in Paris and FedExing oils to each other, the two men didn’t have time to jump onto the court. It’d be a somewhat even match, what with them standing at the same height of 6 feet, 3 inches, and playing the same position of point guard. Aware that Westbrook is on a mission to win his first NBA championship with the Oklahoma City Thunder, Gorham said he’d wait until the end of the season to challenge him. “I don’t want to damage his confidence,” he said.

Self-assurance is something that Westbrook hardly lacks. Pairing skinny ripped black jeans that he found in a vintage store with pointy boots from Asos and an Ann Demeulemeester button-up printed with a monochromatic mess of flashing light bulbs, he continued his campaign to build his fashion empire. Following two workouts earlier that day at UCLA and Manhattan Beach, in the lead-up to the dinner hosted by Barneys New York on Wednesday at the Sunset Tower Hotel, he took over Barneys’ Instagram account, posting what he counted as “a few pix” of his visit to the Beverly Hills store to sign the white and dove gray boxes for the $350 fragrance that is part of his ongoing collaboration with the fashion retailer. What’s more, the Westbrook 0 shoes he premiered earlier this month for Nike’s Jordan brand were on display on three pairs of feet, two belonging to his father, Russell Sr., and younger brother, Ray, and another on Marc Beckman, the DMA United chief executive officer who is responsible for many of Westbrook’s off-court deals. “I was happy that people wanted to buy my shoe,” he said.

The mellow ambiance suited Westbrook. “This time of year, I really try to simmer down a little,” he said. “I haven’t been shopping in a while. I have so many clothes. I haven’t worn stuff from last year yet.”

The same can’t be said for his Thunder teammate Serge Ibaka. After receiving a compliment from Westbrook on his fur-lined mules, Gorham recounted his run-in with Ibaka at the Gucci boutique where he found them. “Ibaka was buying half the store,” he said.

In lieu of shopping sprees, Westbrook has been studying the fragrance industry. Growing up, he said, “I didn’t wear much cologne.” When he did, they were “no-name” brands. “I got it from little marts around my neighborhood,” he said. Working with an intangible object like perfume “was a weird experience,” he said, especially the discovery that an “ingredient can change a whole smell.” Gorham, who’s previously collaborated with nose novices like photographers Inez van Lamsweerde and Vinoodh Matadin, said Westbrook “knows what he wants and doesn’t want. He has a strong opinion.”

As for the finished product, the unisex concoction carries top notes of bergamot and osmanthus and mid notes of black violet and tobacco leaves, on a base of Haitian vetiver. The effect, Westbrook said, is “like nice, warm, rich type feeling, something you can wear whenever, anytime, any day.” In his case, ideally to an NBA championship celebration.