A live auction and lavish dinner celebrated the opening of the exhibition in Paris and the 10th anniversary of the Naked Heart Foundation. 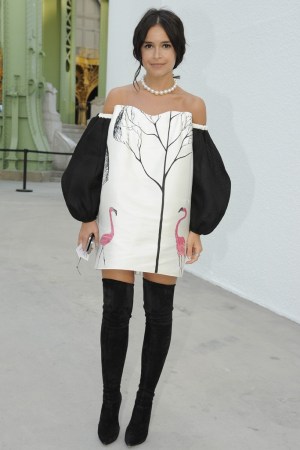 “Madame, you’re a star,” purred a Sotheby’s auctioneer at Paris’ Grand Palais on Tuesday night, cajoling a female bidder into raising her paddle for a private photo session with Paolo Roversi. “Take a picture. Now. Quickly,” he demanded of Roversi, prompting the Italian photographer to jump from his seat and snap a couple of shots — with his cell phone — of a Russian beauty dressed in a baby-pink Dior gown.

It worked. The lot went for 350,000 euros, or $448,571 at current exchange. The auction was part of a lavish dinner feting the opening of the “Monumenta” exhibition in Paris and the 10th anniversary of the Naked Heart Foundation, whose founder, Russian model Natalia Vodianova, was back on her feet and looking as fit as ever less than two weeks after giving birth to her fourth child, Maxime.

“It’s just good genes,” she mused, eager to rush home to breast-feed the newborn. “He is very supportive; he’s waiting for me at home.”

In no more than 30 minutes, the auction raised 1.3 million euros, or $1.7 million, to benefit Vodianova’s charity, which provides care and support for children with special needs and their families in Russia.

“People with mental disabilities are still very neglected. They don’t live very long in Russia,” said Vodianova, lamenting the lack of professional information and adequate schooling for disabled children. She added that “when our specialists recently traveled to America, where they saw a 60-year-old man with autism, it was a strange sight for them.”

Gazinskaya, whose capsule collection for & Other Stories hits stores this week, said it must be hard for a foreigner to understand the installation, which resembled a utopian city. “[Russian conceptualism] is like meditation: You need time and a guide to help you feel it,” she said.

Berenson revealed she is starting “a new book with Rizzoli on well-being and beauty,” slated to come out in 2015, while her natural product line “Soins Sublime” is expanding into Sofitel spas worldwide. “We just opened in London and Munich, and will do Dubai, Macao, Vienna and Los Angeles this year,” she said while strolling through the maze.

Miroslava Duma divulged she had her hands full putting together a panel discussion on Russian textiles (whose potential she judges as “huge”) to take place during the International Economic Forum in St. Petersburg.

“Before World War II, there was a rich textile industry in the country. Factories were producing millions of meters,” which continued during the Soviet Union, she explained, but then “from the 1990s until the beginning of the 21st century, almost 10 years of nothing — total stagnation. Today Russia’s textile imports exceed exports by 120 times.”

Asked about a Russian textile specialty, she quickly said: “Linen.”