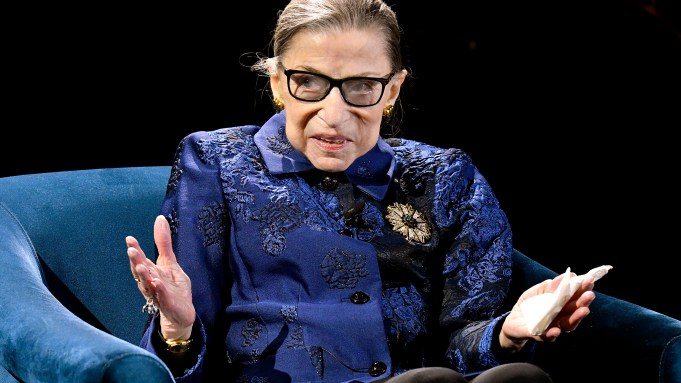 Supreme Court Justice Ruth Bader Ginsburg shared some of her sprawling knowledge on the judicial system, women’s rights and President Trump on Monday night, when she was honored with the Berggruen Prize — an award typically reserved for philosophers.

“I’m not a philosopher, but I do interpret a text,” Ginsburg said during an onstage question-and-answer with BBC reporter Razia Iqbal in front of a chic crowd of Ginsburg’s friends, family and admirers, which included Olivia Wilde, Karlie Kloss, Diane von Furstenberg and Katie Couric. “The text I interpret most often is the U.S. constitution; it is, indeed, a living constitution. Who would want to be governed by a dead one?”

In her conversation with Iqbal, Ginsburg remained optimistic about the U.S.’s political and societal future, even amid the impeachment, global climate change issues and what Iqbal described as a move toward conservatism.

When asked what she thinks about Americans retreating to a more conservative state, especially in terms of abortion laws, Ginsburg noted that poor women are the only people being affected by lack of access to abortion.

“One of the things that happened after Roe v. Wade is that women wanted to be able to control their own destiny. They won, so they retreated. And the other side geared up, and we have the situation that we have today,” Ginsburg said. “[People should] care about it the way they did when many women didn’t have access, didn’t have the right to choose. It is so obvious that the only people restricted are poor women. One day, I think people will wake up to that reality.”

The Supreme Court Justice also told stories of women’s lives in the Fifties and Seventies, juxtaposing their limitations and experiences to how women live today.

“The pedestal on which women were thought to stand more often was a cage [back then],” she said. “In the space of a decade, almost every explicit gender-based classification was gone. And those laws are not going to come back, ever.”

On the subject of Trump’s potential impeachment, Ginsburg remained her even, pragmatic self. Iqbal asked what she thought of Trump’s tweet stating the Supreme Court should intervene to stop the impeachment.

See Also: ‘On the Basis of Sex’ Costume Designer Opens Up

“The president is not a lawyer,” Ginsburg replied. “He’s not law-trained. But the truth is, the judiciary is a reactive institution. We don’t have a program, we don’t have an agenda. We react to what’s out there.”

Hours before Ginsburg’s conversation with the BBC journalist, stars walked the red carpet during cocktails. Couric chatted intently with Kloss, who had to hunch over slightly to match Couric’s height. Von Furstenberg, who wore a necklace that said “In Charge,” fluffed up her hair for the photographers. While Couric and Wilde walked toward the area where dinner was served as cocktails wrapped up, they discussed what they’d personally learned from Ginsburg.

“She’s taught me that if you stand up for women or any underserved or marginalized group, it’s the right thing to do. And she cared about gender equality long before those two words were put together,” Couric said. “She’s so admirable, I want to wrap her in bubble wrap and give her my kidney. Back to you, Olivia.”

“I agree completely,” Wilde said, laughing. “She’s also demonstrated the power of endurance and not letting the cause, the fight we’re all fighting, exhaust you to the point of no longer being useful to the cause. She’s really an example of staying steady and focused — really understanding that which you fight for.”

By the end of the night, there was just one topic Ginsburg hadn’t discussed: her own status as a celebrity and cultural figure known to most as the Notorious RBG.

“I’m called the Notorious RBG after the famous rapper, the Notorious BIG. What we have in common is that we were both born and bred in Brooklyn, N.Y.,” she said. “I think it’s an amazing phenomenon. I’m almost 87 years old, and everyone wants to take a picture with me.”