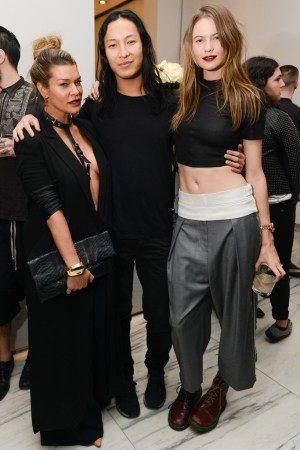 The cool crowd rallied on Tuesday night, descending upon Alexander Wang’s store in Manhattan’s SoHo neighborhood for a book bash toasting “Ryan Korban: Luxury Redefined.” The tome, a collection of Ryan Korban’s work for the past six years, juxtaposes his environments with visuals that inspired him: photographs by Franco Rubartelli, Helmut Newton and Peter Lindbergh, among others.

“I wanted to do something that got people excited about interiors,” Korban said. He was perched on the store’s black leather lawn chair, in a huddle with Vanessa and Victoria Traina and Behati Prinsloo draped over Wang’s shoulder. “We took things from fashion, photography, film and used that to get people to think about interiors in a new way.” A herd of models — Hanne Gaby Odiele, Kasia Struss, Tilda Lindstam, Martha Hunt, Daria Strokous, Fei Fei Sun and Irina Kravchenko — were clicking across the white marble floor to say hello.

“I went out for a little bit last night….” Korban said, post air-kisses. He was sipping a sparkling water. “I probably shouldn’t have,” he continued. The room was experiencing a collective hangover. “I feel a little slow today,” Korban said, taking another sip.

Joseph Altuzarra woke up on Tuesday morning not with a throbbing headache but a growling stomach. “I hardly ate anything last night,” said the designer, his six-year-old schnauzer Bean in his arms. “I never eat in the morning so I had to wait to have a really, really big lunch.” His hangover cure? A chopped salad with shrimp and salmon. “Big but healthy.”

Wang needed one thing: sleep. He’d spent the prior evening partying at Rihanna’s Up & Down blowout until 4 a.m. and had to be at work at 9 a.m. “How do you think I’m feeling? No, I’m good. I’m recovering, you know?” he laughed, sipping on some sort of iced Starbucks concoction. It was a venti. “You’ve got to steam through it, especially for Ryan. I think I see him more than I see anyone else. Literally.”