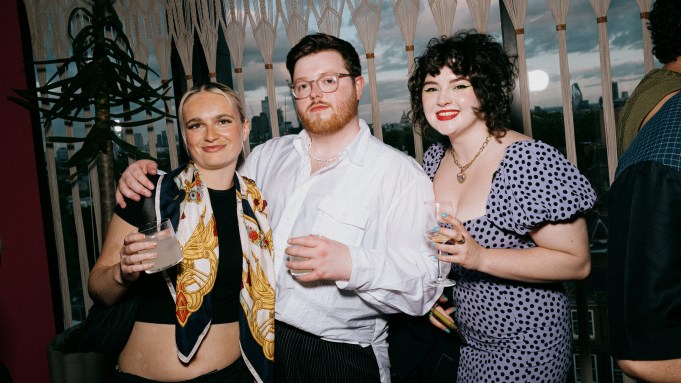 Members of the British fashion industry, including fashion editors, stylists and fellow designers such as Chet Lo and Brandon Choi, as well as faculties from his alma mater, the University of Westminster, including senior lecturer Robert Leach, and Andrew Groves, director of the Westminster Menswear Archive, gathered at The Standard Hotel London’s top floor restaurant Decimo to congratulate the latest winner while sipping delicious cocktails throughout the night.

Stokey-Daley this year beat some 1,900 applicants to walk away with a grand prize of 300,000 euros, plus a year of coaching from experts at LVMH Moët Hennessy Louis Vuitton, parent of brands including Louis Vuitton, Dior, Fendi, Givenchy, Loewe and Kenzo.

The designer has captured hearts and minds with his theatrical shows at London Fashion Week that view the British class system through a queer lens, gaining high-profile fans including Harry Styles, who wore his graduate collection in his “Golden” music video.

Stokey-Daley is preparing his next show in September, which he promises will again challenge the traditional runway format.

S.S. Daley Wins the 2022 Edition of the LVMH Prize for Young Designers