Time was up for all-black dressing as actresses embraced pale hues, crimson, metallics, dark florals and solidarity on the red carpet. 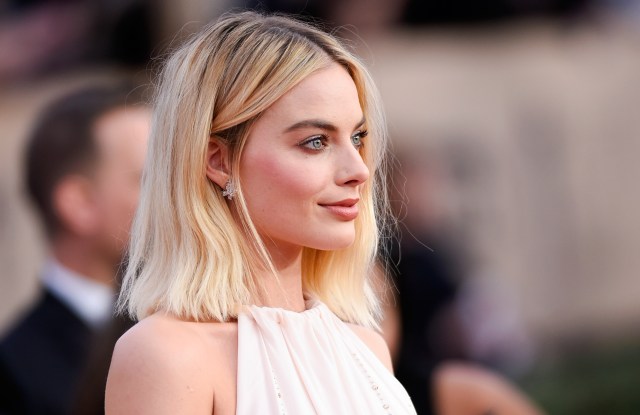 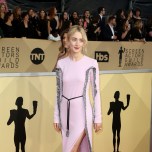 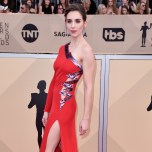 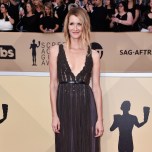 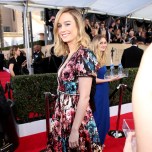 Time was clearly up for all-black dressing at the SAG Awards 2018, but the focus was still on strong women. Case in point, the animated exchange between “Thelma & Louise” stars — and longtime feminists — Susan Sarandon and Geena Davis.

“I think I should interrupt you,” Sarandon teased Davis as she hijacked her interview with a group of reporters at the Shrine Auditorium on Sunday night.

“So do you, doll,” cooed Sarandon. “I watched your movie. You’re so good in it. The movie you did with Tim [Robbins, “Marjorie Prime”]. I got a screener of it. You were fabulous. It was great.”

That interstellar interaction was one of the many during an evening that attracted Nicole Kidman, Margot Robbie, Lupita Nyong’o, Kate Hudson and her mom Goldie Hawn, Reese Witherspoon and Halle Berry. There were a few, such as Davis, who wore classic black glamour gowns, but most others embraced metallics, dark florals, or white, red and pink dresses for the occasion.

“This is Dior Couture,” shared Laura Dern. “I’m such an obsessed fan with Maria Grazia [Chiuri], so it’s a great privilege to wear her tonight.”

While waiting her turn for photographs, Berry was approached by a pint-sized actress hoping for a selfie. “Hi cutie,” Berry greeted the little girl as she happily obliged. Meanwhile, Olivia Munn made an Instagram Story with Hudson and Hawn, Nyong’o chatted with Kidman and Saoirse Ronan laughed with her publicist about the fact that fans had mispronounced her name when they called out to her. “Sushi!” Ronan giggled, mimicking their pronunciation.

“Stranger Things” star Natalia Dyer also wore a Christian Dior Couture gown. “I’m in love with this dress,” she said, revealing its intricate hand-sewn, drawn and painted astrological figures. “The detail that went into it blows my mind,” Dyer laughed. “I’m into astrology, but I take everything with a grain of salt because I’m a Capricorn and I’m skeptical like that. But I like that this dress has a fun, whimsical, celestial vibe. I wish I had more places to wear these things to.”

Meanwhile, Dyer said her black top was more coincidental than intentional in terms of the palette’s potential nod to Time’s Up. “It crossed my mind,” she said, “but it wasn’t the deciding factor in this. I’m glad that moment happened and it did what it did and it was important to have a visual representation, but we can’t rely on just wearing colors. We showed it visually, but now it’s more about action and walking the walk.”

While few attendees made political statements with their attire, sans a Time’s Up pin or two, Betty Gabriel, who starred in “Get Out,” selected a sustainable dress by designer Phuong My. “Isn’t it lovely?” Gabriel said. “I talked about doing something sustainable with my people. I said, ‘I’d love to wear something that’s eco-friendly.’”

SAG newcomer, “GLOW” actress Britt Baron, wore a custom look by Hayley Paige. She was still pinching herself over receiving the red carpet treatment. “I feel like the luckiest woman in the world. I’ve never been to an award show before. The biggest one previously was at, like, my high school for Most Improved in Spanish.”