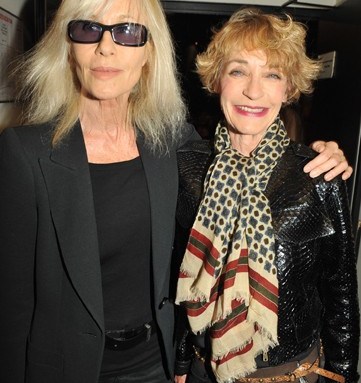 PARIS – Are there no limits to what the French will do for love? Guests attending the Paris premiere of “L’Amour Fou,” director Pierre Thorreton’s documentary about the 50-year relationship between couturier Yves Saint Laurent and businessman Pierre Bergé, revealed the extreme lengths to which most were prepared to go in the name of l’amour.

“I think I would be capable of everything: a murder, leaving my house, dropping everything,” said decorator Vincent Darré. “Death,” declared Melita Toscan du Plantier, director of the Marrakesh International Film Festival.

Fifties-era model Bettina Graziani seemed almost moderate by suggesting a round-the-world trip. Saint Laurent muse Loulou de la Falaise indulged her wildest fantasies. “If I were on a boat, I would plunge into the sea. If I were in the mountains, I would climb the highest peak. I am slightly competitive, so it would be a little performance,” she laughed.

Betty Catroux, Sonia and Nathalie Rykiel, Bernard-Henri Lévy and his wife Arielle Dombasle were among the other guests who turned out to celebrate the release of the film, which opens in French cinemas on Wednesday.

Bergé revealed that some of the archive footage that Thorreton unearthed was new even to him – including grainy footage of Saint Laurent with Mick Jagger and Andy Warhol. “The result is magnificent. I am very, very, very happy with this film,” he declared. The director, meanwhile, was buzzing after hearing that the doc had won the international critics’ prize for special presentation at the Toronto Film Festival, where it received its world premiere this month. “I heard last night. It’s marvelous,” he beamed.

Singer Alain Chamfort revealed he was “slightly obsessed” with Saint Laurent as he prepares to perform his concept album based on the designer’s life at the Théâtre du Châtelet on Nov. 16. What about love? “I don’t think there should be any limits,” he mused. “Having said that, you have to meet the right person. Now that’s a whole other story!”