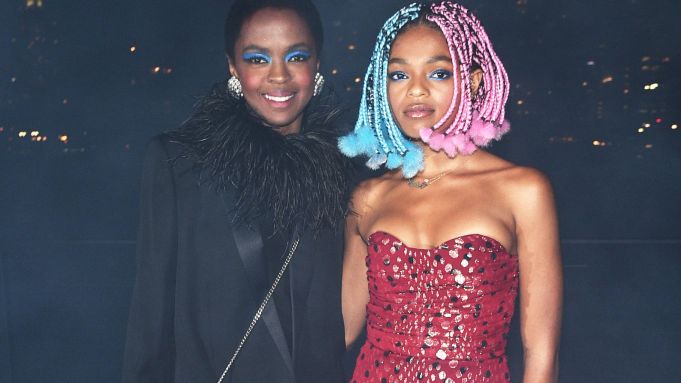 “There was a boat and there are ruffles,” Ezra Miller said, motioning to the collar of his blouse as he stood awaiting the Saint Laurent men’s show. “So it is certainly exciting.”

The lure of a ferry ride was enticing enough for the actor, who hopped aboard and joined a rather stellar front-row lineup at Liberty State Park Wednesday for Saint Laurent’s first men’s presentation.

Some, including Sebastian Stan, had opted to shuttle over in the privacy of a car, but not Kate Moss. There she was, done up in a cleavage-friendly black minidress, aboard one of the ferries Saint Laurent had charted for the evening. Upon docking, she stayed tucked away from the runway space until the eleventh hour, for dramatic effect, of course.

Moss was joined by Lauryn Hill and Selah Marley, who made a mother-daughter night out of it; Stan, who arrived with his stylist; Dave Franco, chumming it up with Miller ahead of showtime, and Vincent Gallo, who was first in his seat. Also in attendance were Travis Scott, Charlotte Gainsbourg, Julianne Moore, Louis Garrel, Lakeith Stanfield, Paul Bettany, Caleb Landry Jones, Jerrod Carmichael, Charlie Heaton, Miles Dominic, Tommy Dorfman, Julia Restoin Roitfeld, Sean Lennon, Sylvia Hoeks and Jordan Roth. The people like their Saint Laurent.

“This is pretty intense,” Stan said, looking around the venue space, as fog was pumped in across the runway. “It’s very cool.”

A representative from the brand came up to introduce himself, and Stan turned his compliments toward him. “I was just saying I have not been to a show like this ever,” he said. “Now I know why you wanted to do Jersey City.”

It was his first time at a Saint Laurent show, but he’s been wearing the label in the past year “especially with some of the recent projects,” he said. “And this is only men’s…a good moment for men’s wear during the summer. Though I’m kind of glad that it is a little cooler.”

Stan’s summer plans involve traveling, working and birthday-party planning. “You know, my birthday is in the summer. It’s always in August, it never changes,” he teased. “So we’ll see what we’re going to do about that, but nothing crazy. Last year I turned 35 and that was a whole thing. But now we’re OK. Now we’re good. It can just be a very simple birthday and I’ll be fine with it.”

It was Jones’ second fashion show experience. “It was for the Bread and Butter festival, with G-Star, about seven, eight years ago,” he said. “That was a very good idea of what the fashion industry is like. At Hitler’s airport, it was. This is a lot more relaxing.”

As for what drew him out to Saint Laurent? “I was very excited to come see what the heck it was all about. Now I’m here in a futuristic playground and it’s very nice,” he said, in his Texan drawl. “I’m dying to have a cigarette outside before it starts.”

Less chatty was Stanfield, also marking his second fashion show attendance, who nonetheless obliged yours truly with a few words.

Last time he took a ferry? “A couple years ago.” Working this summer? “Mmmmm…nothing much.” Traveling at all? “No.” His own sense of style? “Individuality.” And his interest in Saint Laurent? “Um..Saint Laurent is cool.”

Getting Ready for the CFDAs With Kelsey Asbille

A Brooklyn Bash for the CFDA Awards Crowd