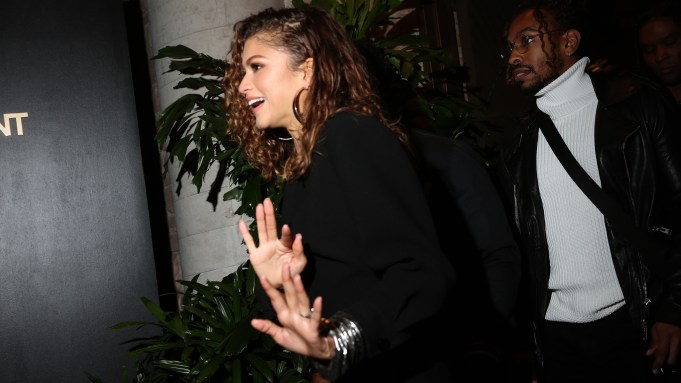 For the first time, Saint Laurent hosted a pre-Oscars party.

It was a dinner followed by a party, with some jetting out after dessert — served on a long, stretched table outside. The backdrop, L.A.’s sparkling skyline, was a sight to be seen.

“It’s so beautiful, this 360-view,” said jewelry designer Daniela Villegas. “And the trees, the banana leaves.”

She, Glazer and Lynch, Anthony Vaccarello, G-Eazy with Ashley Benson, Troye Sivan — and a slew of slim models donning the Saint Laurent uniform (head-to-toe black, many in leather, some in spiked chokers) — were among those gathered to watch the night’s entertainment: British rock band Wet Leg.

“Cheers,” said singer Rhian Teasdale, a woman of few words, onstage before playing their hit “Chaise Longue.” “This is our last song.”

“I’m into this,” remarked G-Eazy, snapping videos on his phone before introducing Benson to Myles Hendrik, who was soon inside spinning behind the DJ booth.

It was a relaxed atmosphere, with guests mingling throughout the house — a historical architecture built by John Lautner. Apatow, Schafer, Fike and Almodóvar were still hanging, as were Lykke Li, King Princess, Adwoa Aboah, Amber Valletta, Dave Franco and Joe Keery with Maika Monroe.

While the party began winding down for some, for others it was just beginning. Just before 11 p.m., Keke Palmer and Aziz Ansari made their way inside.