A small crowd caught up with the designer in New York on Tuesday. 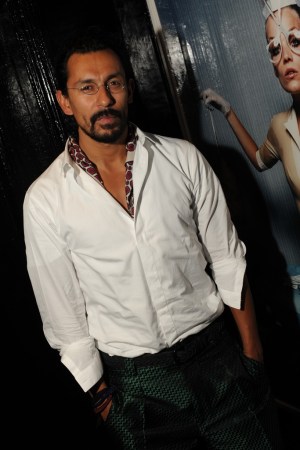 Much to the chagrin of New York fashion folk, Haider Ackermann’s appearances in town tend to be sporadic. So when the designer has touched ground at JFK, it must be celebrated. Hence the dinner on Tuesday night at the West Village boîte The Lion in his honor, hosted by Saks Fifth Avenue president Ronald Frasch and W magazine’s Stefano Tonchi. Guests climbed the stairs above the buzzing dining room to the private second-floor library, its entryway dissembled by 18th-century portraiture (no speakeasy detail goes unappreciated). Inside the cozy space, guests milled around among the deliberately-tattered furnishings and prop literature. Attendees — including Josie Natori, Waris Ahluwalia, Alina Cho, Vanessa Traina Snow and Max Snow — caught up with one another over cocktails. Chatter inevitably turned to the previous night’s Met Ball. “I stopped by The Standard. I didn’t want to stay out late,” Ackermann said of his Monday evening activities. “When I’m here, I want to enjoy New York. I woke up this morning and the sun was shining. I just wanted to be out on the street and feel it on my face. Let me be on the streets of New York and I’m happy.”

Afterward, the crowd moved inward towards the dining area, where comfort food — a kale and ricotta salad followed by either paprika-seasoned organic chicken, a massive Delmonico steak or homey ricotta gnudi topped with black truffles — was served to a room full of those in need of comfort.

Liya Kebede told tablemates she skipped the til-the-wee-hours bedlam in favor of an early bedtime. “I had to work this morning so,” she said. “And I live like five blocks away from the Met so it was an easy choice for me.”

As the table dug into the last dish, a cherry almond cheesecake, a tablemate summed it up: “I’m not going to lie, I wouldn’t mind it if I never heard the word ‘punk’ again.”