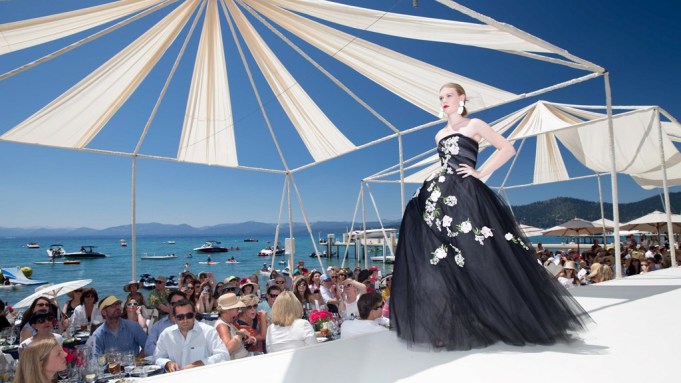 Lake Tahoe was ultrablue on Saturday for the 44th annual Save the Lake benefit, a luncheon and glamorous lakeside runway show of Oscar de la Renta’s resort 2014, presented by Saks Fifth Avenue.

Saks has been a part of the fund-raiser since 1969 when it was first presented on Rubicon Beach by a barefoot Bill Blass. “The Oscar Show” as fans now call it, is the highlight of the Tahoe summer season, and this year it drew a record 600 guests and raised more than $505,000. Darayn Hickingbotham was the winning auction bidder of the New York Fashion Week lunch with de la Renta, at $28,000. Graff was also a sponsor.

At the 1975 show, organizers bolted down sheets of plywood to prevent Blass’ models from sinking into the sandy shore. Today, there’s a dramatic raised runway.

“The blue of the lake is like pure sapphire, and I’m so happy to support the group that protects Lake Tahoe,” said de la Renta, who flew in with stepdaughter Eliza Bolen, her husband, Alex Bolen, and their 8-year-old son, Philip.

“It’s a fantastic setting for showing the collection,” said de la Renta, who first showed on the lake in 1995. “At first I worried about showing evening gowns in bright sunlight, but they look so glamorous and a little surreal. I love it.”

Over the years, the benefit has raised more than $15 million for The League to Save Lake Tahoe’s efforts to keep the lake blue. Last year Lake Tahoe’s waters were the clearest in 10 years, according to University of California, Davis scientists who study the lake. A runway highlight was a tribute to style-setter Diana Dollar Knowles, recently deceased, to whom the day was dedicated. Knowles, a longtime de la Renta client, was one of the fund-raiser’s founders and was chairman of the event for more than four decades.

Models did a runway walk of six pieces from Knowles’ archival Oscar de la Renta collection. The last piece down the runway was a print velvet fox-trimmed jacket, which was auctioned off and acquired by Tom Perkins. Temperatures hovered near 80 degrees but chic shade structures by Riccardo Benavides kept guests comfortable.

Young Philip Bolen patiently watched the show with his parents.

“Philip told me that after the show he wanted to jump off the roof of the boathouse into the lake,” said Alex Bolen. Father and son accomplished the considerable feat, and swam in the chilly lake.