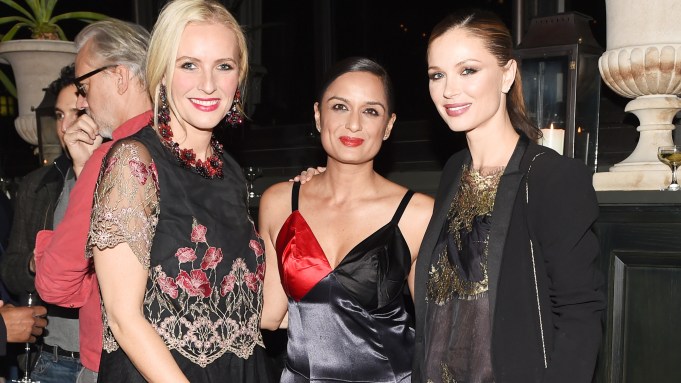 On Tuesday evening, the full spectrum of American designers gathered atop the Gramercy Park Hotel’s terrace to welcome Roopal Patel as fashion director of Saks Fifth Avenue. Patel’s appointment, which was announced in September, marks the first time the retailer has had such a director in 11 years.

“We’ve been doing this a little while, so we’ve known Roopal since the Bergdorf days,” Neville said. “She helped us when the brand was really small back in the day.”

Patel proved to have quite the pull with the young designer crowd, as many of the new CFDA guard came out to toast her. “The Orley boys I mentored in the CFDA incubator, Jonathan Simkhai I mentored, these are designers who I’ve grown up with,” Patel said, just as the Orley boys and Katie Ermilio, another Incubator designer, rushed up to embrace her.

“I’ve known Roopal for just under four years now, I met her when I was part of the CFDA incubator program,” Simkhai said. “She was appointed to me as a mentor, and she really gets what it takes for a young designer to break into the market.” Simkhai, who recently won the CFDA/Vogue Fashion Fund award along with Aurora James of Brother Vellies and Rio Uribe of Gypsy Sport, admitted things have been full speed ahead since the win. “Business is really great, our sell-through in stores has been phenomenal,” he said. “We’re really excited about dressing women, making them feel powerful and open.”

In addition to Céline and Saint Laurent, Patel mentioned several British designers she’s excited about having at Saks at the moment. “Erdem [Moralioglu] was in the store last week, and Simone Rocha, we just believe immensely in her talent, she’s a rising star for us,” Patel said. And “Gucci — I think there’s no shortage of fashion love for Gucci.”