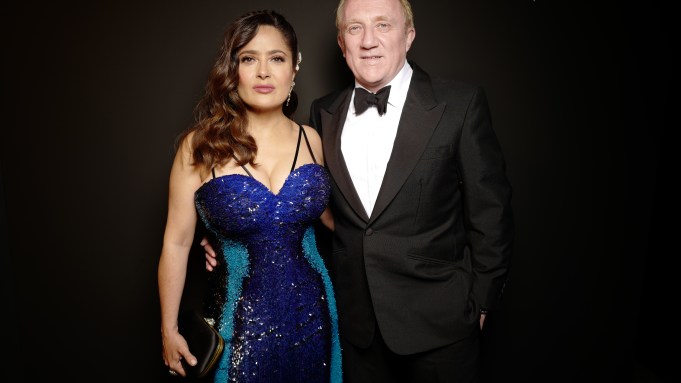 Kering president François-Henri Pinault had been keeping a secret from his wife Salma Hayek. It all came out in dramatic fashion Sunday night when she was awarded the Women in Motion prize at the Cannes Film Festival.

Pinault’s company honors a female filmmaker every year, and in a surprise move, film festival artistic director Thierry Frémaux announced the name of the unsuspecting Hayek.

“First of all, I don’t have a speech and second of all, I’m short and this thing is intimidating,” she said from behind the imposing podium. The actress spearheaded the award and educational program back in 2014 to bring more women’s voices into the film festival, long before the 5050 by 2020 and #MeToo movements.

She commended the winners of the young Women in Motion award — Italian director Maura Delpero for her film “Maternal,” and Australian director Shannon Murphy for “Baby Teeth” — and praised their ability to balance beauty and brains.

“I’m very old. I’m 54. I come from a generation where you had to choose. If you decided to embrace your beauty you were never going to be taken seriously. You either had to be beautiful, or try to look really bad and hide the boobs,” she said, guilty of neither in a low-cut Gucci dress. “But I think we are entering a world — and I know it’s messy right now — a world where we can start pushing the limits, and that’s art. Art is pushing our neuro connections to new places where we never would have seen ourselves.”

“There’s a sisterhood that we can really feel,” French chanteuse Lou Doillon said of the night celebrating women in film. The daughter of Jane Birkin and sister of Charlotte Gainsbourg, the “Devil or Angel” singer said growing up in a family of artistic women had given her an immense amount of freedom. “We need to see people who represent that force, and I was lucky to see it around me. It’s very important to showcase women, because you can’t imagine that you can do it if you haven’t seen someone do it. Some very strong people can but the majority of us need examples,” she said.

Pinault also spoke about luxury group Kering’s sustainability efforts. “We have been working on these issues, the environment and issues for women for 15 years. It’s built into the culture of the group, it’s part of who we are. It’s not something we are trying to add on top and I cannot imagine any modern company without a cause that is beyond profit.” As for the fashion industry itself? “It’s moving in the right direction, but there is a long long way to go.”

“It’s nice to see faces again, to see smiles. It’s weird to live in a world where half of a face is covered and you can’t understand and feel anything,” said juror Mélanie Laurent. Fellow juror Maggie Gyllenhaal has been making connections at the festival. “I just, for the first time ever, spent some time with Jessica Chastain who I think is a powerful, really brilliant actress,” she said. The two met at the Chopard party Wednesday night.

At a table perched under a tree, Jodie Turner-Smith and Noomi Rapace bonded over their babies, sharing photos on their phones. As guests dined on three courses from Michelin-starred chef Adeline Grattard, Turner-Smith met Tonya Lewis Lee and the new mom praised the children’s author for her books including “Giant Steps to Change the World.”

Turner-Smith, clad in Gucci as she has been all week, had her own security guard for the evening. He was keeping his eye on the dripping diamonds she had on from the brand’s high jewelry collection following a theft of other pieces from her hotel room Friday.

Jury president Spike Lee was engrossed in the England vs. Italy European soccer championship final. The director, a big fan of the Arsenal team, was rooting for England and had his phone propped up on the table all night. Frémaux promised to give updates from the stage, but he couldn’t fight the phones as more and more lit up the room. Eventually he gave in and soon the soccer match was on the big screen. Cheers went up as Italy won, except for a disappointed Lee.

Post-game and with her award in hand, Hayek was ready to party. When Elvis Crespo’s merengue classic “Suavamente” came on, she pulled her tablemates up to dance. Horns and shouts celebrating Italy’s win could be heard from the far away Croisette — Cannes is less than 40 miles from the Italian border, after all.