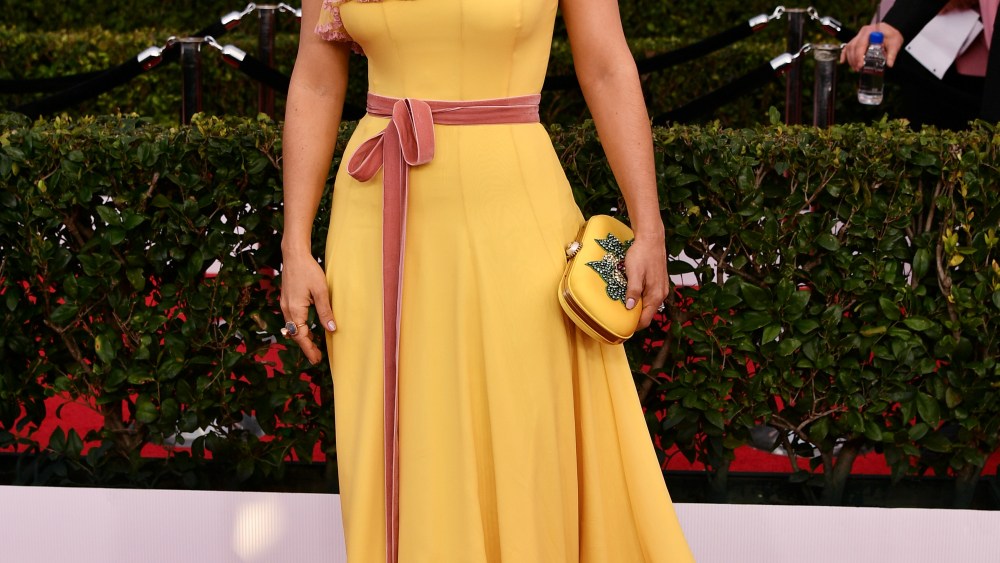 If there are ear-splitting shrieks coming from the bleachers, it must be an awards show. The SAG Awards 2017 rolled out its red carpet on Sunday at Los Angeles’ Shrine Auditorium for a boatload of stars, who fans had camped out to see.

“Ryan! Ryan!” they cheered, causing John Legend and Chrissy Teigen to look around and spot Ryan Gosling. The trio soon shared a hug and a photo opp as they walked inside the show.

“It goes on a long time, this whole [awards] season, but it’s fantastic,” said Naomie Harris. “This is how we get attention for a little movie like ‘Moonlight,’ which doesn’t have a steep budget.”

While the 23rd Screen Actors Guild Awards telecast opened by acknowledging the recent state of affairs, most attendees stuck to the script and dodged such discussion on the carpet.

“I’m sorry I cannot answer your question,” Salma Hayek said, when a reporter asked her what issues are closest to her heart. “I think, more than ever, I have more issues that I worry about than ever in my life.” However, the actress was more than happy to share her (very obvious) fashion credit. “It’s Gucci, you know?” After a journalist told her, she “looked insane,” Hayek laughed, “I hope that’s good!”

For all the red carpet looks you need to see, click here.

For their first SAG Awards ceremony, the cast of “Stranger Things” practically coordinated looks. “We decided what to wear months ago,” deadpanned Joe Keery. One might believe him since Millie Bobby Brown and Natalia Dyer both wore bright red, custom Emporio Armani and Miu Miu, respectively.

“We were surprised,” laughed Dyer. “I saw Millie in the hotel on our way down to the car. I was like, ‘Oh my gawd.’ And Cara [Buono] is also wearing a [version of] red. We’ve got a theme going on.” She insisted they hadn’t intended to coordinate, although her co-star Charlie Heaton joked, “I wanted to wear that.” Dyer teased, “Yeah, Charlie and I fought over the dress.”

Gretchen Mol, nominated with her “Manchester by the Sea” ensemble, said that her cast, which includes Michelle Williams, Casey Affleck and Lucas Hedges, didn’t discuss fashion. “Unless you’re ‘Charlie’s Angels,’ you’re probably not going to coordinate,” she said.

Meanwhile, Teresa Palmer wore a sleek Valentino gown after giving birth just six weeks ago. “I was breastfeeding and burping while getting ready,” said the “Hacksaw Ridge” actress. “I have two kids under three. It’s definitely a juggle when I’m getting makeup done. My oldest son Bodhi loves to get involved in the make-up process. He was airbrushing my arm.”

Attendees did double takes when “Transparent” actress Amy Landecker and “Black-ish” star Jenifer Lewis arrived wearing the same leopard print suit by St. John. “This was a last-minute switch,” Landecker laughed. “My stylist is going to die….I’m just preparing for ‘who wore it worse,’ and losing.”

Meanwhile, “Big Bang Theory” actress Mayim Bialik has long made sartorial choices based on her beliefs. “This is Miri Couture, a modern Orthodox designer,” she said. “This particular designer makes every dress sleeveless with the options for sleeves.” But she didn’t leave it at fashion talk.

“We don’t all have to agree on politics, but the fact is I’m not just an actor, but I’m a mom and I’m the grandchild of refugees and I’m child of civil rights activists,” she continued. “So this is all hitting very close to home. I’m honored to be here. I’m honored that our show is here, but I’d honestly rather be at a protest right now.”