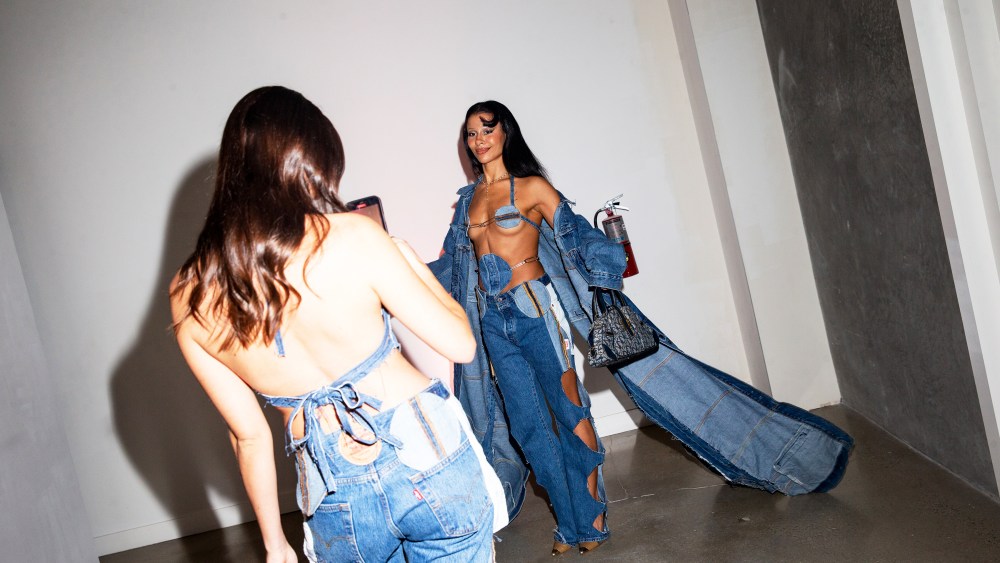 It was a circular moment in more ways than one at Sami Miró’s dinner Saturday night, celebrating her collaboration with Levi’s.

The very first item the designer created for her namesake brand, Sami Miro Vintage, was made from upcycled vintage Levi’s — a mesh bodysuit with patchwork over the bust.

“It really was inevitable,” the Los Angeles, California-based designer said of the partnership. Originally from San Francisco, Levi’s was “the epic company growing up,” she said. “My first canvas.”

Launched in 2016, SMV, as it’s known, offers apparel made from vintage and deadstock materials. Everything is designed and produced in L.A.

“I come up with ideas really quickly, and it’s typically the first thing that comes to mind,” Miró said. “I go with my gut.”

Circles were in her mind when creating the new capsule — six gender-fluid denim styles made using upcycled Levi’s jeans and truckers — offering round pockets and cutouts. It’ll be available on Oct. 18 exclusively on the Levi’s app and SMV site.

“This trench is my favorite piece in the collection,” Miró continued, of the floor-length jacket she had on. It dragged dramatically behind her. Wearing jeans, she completed the look with a bra and waist belt she created on the fly that day from leftover scraps.

“I thought I should make something a little special for myself,” she said.

Moments later she unveiled a short film for the line that she wrote and directed.

“I wanted to showcase the direction that the fashion world is taking the planet, which is negative,” she said. “And end it in a way that brings us back to where we are right now in hopes that people realize what we have in front of us and that we need to appreciate Mother Earth.”

A massive orb of leftover Levi’s denim featured in the video was displayed at the dinner party, held at Citizen News in Hollywood.

“For me that’s a representation of a landfill,” Miró said.

West, a creative director who worked with Pardo at Fenty (“she trained me in this kind of creative space”), was tapped to bring on the brands showing at LAFW. Calling up Miró was a no-brainer, he said.

“Sami is one of the first brands I thought of,” he went on. “Everything she creates is intentional. And as far as culture, all the girls wear it. We all love it. If you know, you know.”