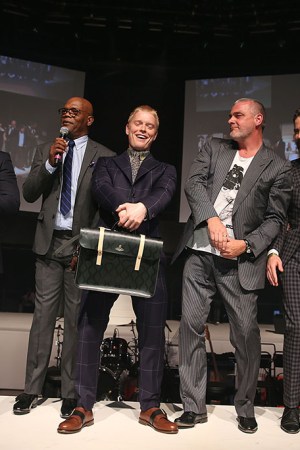 SIA MOMENT: Such was the blinding star power of the actors, models, comedians, musicians and sportsmen assembled at the One For The Boys Fashion Ball in London that when the Australian singer Sia Furler — the evening’s surprise guest performer — looked out from under the long curtain of blonde hair that obscured her face, she failed to sing “Elastic Heart.”

“Oh no. I forgot the words,” she confessed. “I’ve been on a plane for God knows how long and…I locked eyes with someone on table two and thought, ‘You look nice, I wonder what you’re thinking about.’ Then I forgot the words. Does anyone know the first lines of ‘Elastic Heart’?”

An obliging member of the audience shouted out: “And another one bites the dust; Oh, why can I not conquer love?” She thanked him, and then belted out the song to the party’s co-hosts, Samuel L. Jackson and Stanley Tucci, and guests including Jesse Metcalfe, Freddie Fox, Ray Stevenson and singer Mollie King, who was wearing a white Ralph Lauren dress and Monica Vinader jewelry. “The only thing I actually own is my underwear,” she said.

The ball, held at the Roundhouse in Camden, was in aid of One For The Boys, a charity founded by Sofia Davis and chaired by Jackson. It raises awareness and funds to educate men on the many cancers affecting them by talking about health issues and promoting regular check-ups.

“There was a lot of chatter online today… people talked about having or discovering or finding out about cancer in time, and going on to live honest and fruitful lives through early detection,” said Jackson.

Earlier in the day Jackson was chatting about the charity over a round of golf at Bearwood Lakes, a club outside London, with Aidan Quinn, Haley Joel Osment, Alice Cooper, Luke Wilson and captain of the English rugby team Chris Robshaw.

“I play golf because I’m an only child and I like games that allow me to take all the credit or all the blame,” said Jackson, who has a handicap of two. “I don’t like team sports.”

After performances by John Newman and Paolo Nutini, Jackson’s friends joined him in a hammed-up catwalk show.

Alice Cooper practically slithered around, popping his cuffs then flamboyantly ridding himself of his Belstaff jacket.