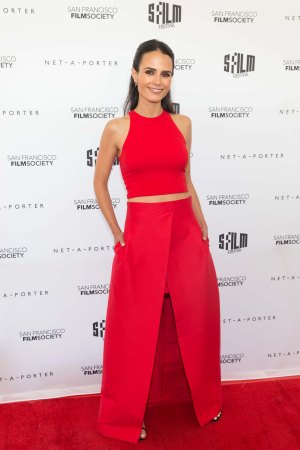 Last night, Net-a-porter cohosted a dinner and awards ceremony during the San Francisco International Film Festival at Fort Mason. This was the second year in a row that the high-end e-tailer has sponsored the event, and it was a key chance to get in front of the lucrative, yet tricky, Bay Area market. The evening was one of the last events at the Herbst Pavilion, a former military warehouse along the waterfront, before it becomes a center for the San Francisco Art Institute.

Among the honorees and guests were film industry notables Ellen Burstyn, Mira Nair, Jordana Brewster, Marcia Gay Harden and up-and-comer Olivia Culpo. Attendees included those from the local culture and style set, including Vanessa Getty, Katie Traina and Todd Traina, who is on the board of the San Francisco Film Society.

Burstyn received the Peter J. Owens Award, given to an actor whose work exemplifies brilliance, independence and integrity. While walking the red carpet, Burstyn said that integrity had always been an important part of her career — “the backbone of your character” — she said, and she’d always been independent. As for the brilliance, she couldn’t comment on that. Harden, whom she choose to present the award, did that for her, calling her a “goddess.”

“She would,” said Burstyn with a laugh, saying that after meeting on the set of “Spitfire Grill,” the two had become very close.

Harden called her a “remarkably intelligent, giving, kind woman” who had been there for many important stages in her life. “San Francisco,” although it was cosmopolitan, Harden said, “was completely upstaged by her.”

Brewster, who attended with close friend and film society board member Max Boyer Glenn, said she jumps at any opportunity to come to San Francisco from Los Angeles. Newcomer Olivia Culpo, who was excited about signing her second film — an indie romance — was happy to come as a guest of Net-a-porter, which she praised for “empowering females as a company.”

And that was just it, said Net-a-porter’s Lydia Williams. San Francisco, she said, was a hugely important market for the tech company and retailer, as it was an ideal blend of philanthropy, tech and the arts. Certainly a number of high-powered local executives, and festival supporters, would concur that the feeling is mutual.