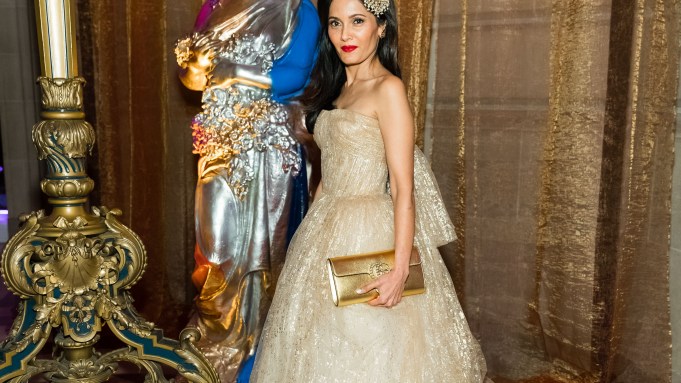 After 10 days of torrential rain, the clouds parted for the San Francisco Ballet’s season-opening fund-raising gala. Guests arrived at the gold filigree-framed portals of City Hall in full regalia of couture gowns for cocktails and a celebratory dinner in the Beaux-Arts rotunda. Decor by J. Riccardo Benavides included kinetic mapping projections that manipulated the grand interior architecture and appeared to make stairways and arches shape-shift and disappear.

Onstage at the opera house before the program commenced, Dede Wilsey was awarded the Lew Christensen medal for her five decades of patronage and service to the company. “When I first arrived in San Francisco in 1965, I was invited to become a member of San Francisco Ballet Auxiliary and I’ve been involved with the company ever since,” said Wilsey in a glittering white Oscar de la Renta gown. “Ballet gives me such joy and it’s a pleasure to be associated with a world-class company that’s both classic and experimental.”

Fashion and dance were the focus for the evening’s glittery crowd, but feminist issues were a major topic of discussion. Komal Shah ran into Larissa Roesch (wearing an Andrew Gn gown), with whom she founded the Center for Gender Equity and Leadership at University of California Berkeley’s Haas School of Business.

“We are planning to highlight and celebrate next year’s centennial of the women’s suffragette movement,” said Shah. “Women have come so far and there is still a lot to do for women in the business sphere. Equity is more urgent than ever.”

Yurie Pascarella, in an ethereal pale blue chiffon and ostrich feather gown, said she made a point of choosing to wear Marchesa couture. “Women must support other women at difficult times,“ she said, referring to designer Georgina Chapman, former wife of Harvey Weinstein. “Plus I love the elegance of her designs.”

Caroline Chang chose her Dior azure chiffon gown because she admires designer Maria Grazia Chiuri. “I love the way she has brought feminism and fashion together in such a dynamic and meaningful way,” said Chang. “Plus her designs are classic with a modern edge.”

Mary Beth Shimmon, in a Carolina Herrera gown, had just returned from a trip to New York to join a breakfast meeting with Anna Wintour and Hamish Bowles, in the Vogue editor in chief’s office. “It was a ‘get to know our readers’ small gathering, and I was seated next to Anna,” said Shimmon. “I assumed we’d be talking about fashion, so I studied up, but the first question Anna asked me was, ‘What issues and causes are you passionate about?’ I mentioned the recent Contemporary Muslim Fashion exhibition at the de Young Museum in San Francisco, and Anna was very aware of its success and it’s ground-breaking approach,” she noted.

“It’s great to see more female choreographers on the program,” said Langston-Jones, who was accompanied by her daughter, Sophia Wickens, a ballet student, who recently auditioned for San Francisco Ballet’s summer intensive program. “Women’s choreographers are somewhat rare in classical ballet, and Rowe is exceptionally talented.”