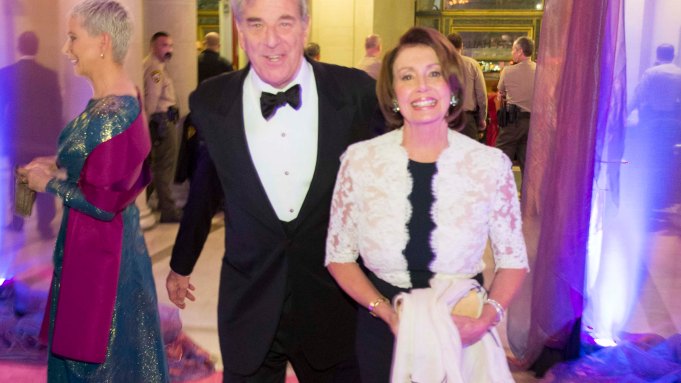 “I’ve loved the ballet since I was a young girl, so I had to be here,” said Getty, who was accompanied by Damian Smith, the star of the company who recently retired. “I’m looking forward to seeing all my friends, and especially ‘Rubies,’ because I love Balanchine,” said Smith, who is working on art projects, including creating large-scale body paintings that reproduce the gestures and emotion of dance.

The evening began with cocktails and dinner beneath the Beaux-Arts rotunda of City Hall, decorated with ostrich feathers and winged statuary by Riccardo Benavides. California Lieutenant-Governor Gavin Newsom dashed in from Marin County where he lives with his family. Asked who was the designer of his classic tux, he replied, “I don’t know. I haven’t bought a new tux since my wedding in 2008. Well, perhaps you could say it was designed by Banana Republic, or Gap or Old Navy,” he cracked. “The Gap has been a big supporter of my campaign for governor.”

His wife, Jennifer Newsom, who premiered her film, “The Mask You Live In” about American masculinity at last year’s Sundance Film Festival, is awaiting the birth next month of their fourth child, a boy, as yet unnamed. “I read stories to the kids, got dressed and headed into the city,” said Newsom. ‘Yes, a new film is in the works.”